•He’s fetish, bathed deep in the night; sex with him is painful —Woman 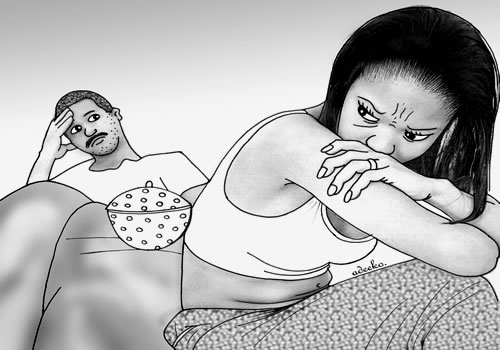 A man, Hammed Bello who dragged his wife, Rukayat Bello before Oja Oba/ Mapo Court C Customary Court, Mapo, Ibadan, Oyo State, stated in his divorce suit that she was always blackmailing and accusing him of being fetish.

He begged the court to stop their marriage because according to him, she had soiled his name and dented his image enough.

The plaintiff pleaded for the custody of their two children whose welfare he stated would be his priority.

Rukayat agreed that their wedlock be dissolved.

The defendant explained that their marriage lacked the expected intimacy because sex with her husband was painful.

She added that he’s fetish and bathed everyday in the middle of the night. Rukayat said she was ready to leave because she didn’t want her husband to use her for ritual.

Hammed said during the court session that: “My lord, I have come to court because I don’t want to do anything drastic. Rukayat is bent on denting my image and destroying my name. She refused to relent on blackmailing me.

“Any time Rukayat and I have a misunderstanding, she will cook up lies against me. My wife is always seeking to disgrace me.

“She consistently embarrassed me before our children and neighbours by referring to me as fetish.

“My lord, Rukayat went as far telling who ever cared to listen that I wanted to use her for ritual.

“If I allow my wife a minute longer under my roof she would take a step further by indicting me of murder and get me locked up behind bars.

“I’m not willing that Rukayat ruin my life as a result of her uncouth behaviour.

“I, therefore, pray this honourable court to dissolve our union so that we can go our different ways.

“But my lord, I pray that you put our children in my care. If Rukayat is allowed to raise them, she would impart in then negatively,” the plaintiff said.

“Hammed has never wished that I make progress in life.  He has ever been a clog in the wheel,” Rukayat stated whilegiving her evidence.

“I sought for spiritual help when I observed that things weren’t going on well with me and by extension our home. but Hammed would not hear of this.

“He fought me anytime I sprinkle our house with water, oil and some other items,” the defendant explained.

She went on: “I don’t enjoy sex with my husband because it is painful.  I feel heavy and experience ache all over my body whenever Hammed and I make love.

“My lord, I undergo such an experience because my husband is diabolic. Hammed is into evil which is the reason I never cease to accuse him of being fetish.

“My husband is always taking his bath in the middle of the night.

“My lord, this bath is not ordinary. He is carrying out a ritual. This explains why my health is deteriorating day after day.

“I plead that this court ends our marriage. Hammed is using me for ritual purpose. If I continue to stay with him I will soon die.

“I, therefore, pray that you separate us,” Rukayat begged.

Giving his judgment, the court president, Chief Ademola Odunade observed that their union had broken down irretrievably and therefore pronounced it annulled.

Odunade gave custody of their two children to the defendant and ordered the plaintiff to be responsible for their welfare with education and medical service given the most attention.

He was in addition directed to give the defendant N8,000 every month as their children’s feeding allowance.

This he explained should be carried out through the court.