My wife beats me, ties my manhood with wire, 45-yr-old man tells court

•He spends his salary on alcohol, denies paternity of our second child —Woman 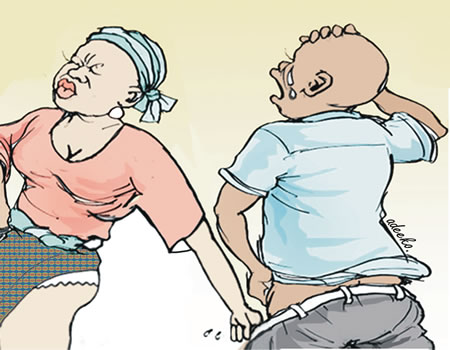 A carpenter lamented before a local court in Ndola, Zambia that his, wife, Bridget Kabwe, had the habit of tying up his manhood with a piece of wire after beating him severely each time they differed.

According to The Zambian Observer, Jackson Sichamba, 45, made this revelation during hearing in a divorce case initiated by his wife, Bridget Kabwe.

Bridget, 33, brought the matter before Kabushi Local Court to dissolve their marriage of 14 years.

Jackson said he and Bridget had lived well when they got married but problems started when she started stopping him from going out to drink.

He said whenever he got paid, his wife would grab his entire salary leaving him with nothing.

Jackson complained that each time he went against his wife’s advice not to drink, she would beat him mercilessly and tie wires around his manhood.

He told the court that each time she tied up his manhood with a strand of wire, he would experience excruciating pain.

“My wife is a violent women, Each time I  come back from drinking, she used to beat me and tie my manhood with wires.”

But Bridget testified that Jackson had a habit of misusing money.

According to her, each time he got paid,  he would disappear and only return home after he had squandered all the pay on beer.

She told the court that they married in 2005 and had two children and that Jackson had paid K30 dowry.

She said her husband used to insult her the whole night causing neighbours to complain because they could not sleep.

Bridget said whenever she reported Sichamba to his relatives, her mother-in-law would instead blame her for his ill-behaviour.

Bridget told the court they moved to Lusaka in 2014 to live with her husband’s sister until 2017 when they found their own house.

“Whenever he got paid, he would disappear for more than a month leaving the children and me to starve. He would only return home after all his money is finished, ” she said.

She said one time he disappeared from home and when she called him the following day, he told her he had been arrested for loitering.

However, when she went to check on him at the police station he was not there. Instead, she found him drinking beer with his friends.

“When I approached him, he was furious and started insulting me and telling my child that I was a prostitute and that the other child was not his son,” she said.

Bridget said while they were still in Lusaka, Jackson sold their fridge, abandoned the family and left to live in Ndola.

She stated that she managed to raise some money and sold some things in the house and followed him to Ndola because she could not manage to pay rent and look after their children alone.

In passing judgment, the court dissolved their marriage on grounds that the wife had lost interest in it.

It ordered  Jackson to compensate Bridget with K7,000 with the first payment of K1,000, thereafter K300 monthly and to pay K300 per month for child maintenance.