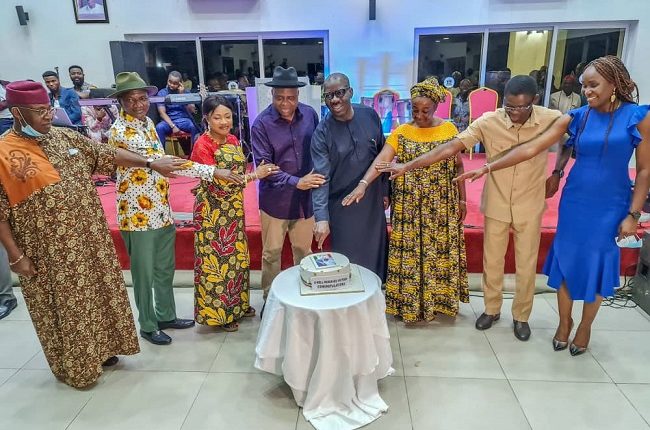 The Governor of Edo State, Godwin Obaseki, says his victory in the just-concluded gubernatorial election signifies unity for the people of the South-South region of the country, adding that the determination of the Edo people to make their votes count reiterates the fact that there is hope for democracy in Nigeria.

Speaking in Yenagoa on Tuesday night where he was hosted to a state dinner during his thank-you tour to governors and people of South-South states to express his appreciation for their support and prayers which led to his success at the poll, Obaseki said he remains grateful to the Governor of Bayelsa State, Douye Diri, for the role he played during his trying times.

Obaseki, who was accompanied by his deputy, Philip Shaibu and members of the state Peoples Democratic Party (PDP) Campaign Council led by the chairman, Chief Dan Orbih, said his return to the PDP has brought all the states in the South-South under one party which in turn will foster rapid socio-economic development in the region.

“Our victory is from God and our success in the election shows God alone has the ultimate power. Saturday’s election became a national election because Edo people had to test and re-examine Nigeria’s democracy. Thank God President Muhammadu Buhari stood up to the task and did the right thing.

“Thank God the election reflected the will of the people, if not, the state and region would have been in grave danger. As a nation, we should learn to take our destiny and future in our hands and never allow one man or few groups of people decide it for us as we have what it takes to be great,” he added.

Commending the President of Nigeria, Muhammadu Buhari, for ensuring a levelled playfield for all contestants during the polls, Obaseki expressed optimism that the outcome of the just concluded election in Edo State will rub off positively on future elections in the country and allow the will of the people to prevail at all times.

Congratulating Obaseki on his victory, Governor Diri, described the victory for PDP in Edo State as a victory for the Edo people, saying Obaseki’s re-election was a triumph for democracy in Nigeria and a litmus test that the country passed creditably.

He said, “My brother governor was disqualified by his former party, which claimed he did not have a certificate. The irony was so strong that those of us watching from the sides were asking if the party was serious that a sitting does not have the qualification to contest an election or that it was going to go like what happened in Lagos.

“May I use this opportunity to congratulate all the people of Edo State and members of the Peoples Democratic Party in Edo. This victory is not for Edo people alone. This is a victory for Nigeria.”

Diri berated those who played the role of God while expressing the optimism that the South-South would remain a PDP stronghold and the party would transform the fortunes of the region.

In a welcome address, the Bayelsa Deputy Governor, Senator Lawrence Ewhrudjakpo, said the victory was a precious gift to the PDP family and urged the party to sustain the momentum as they go into the Ondo election on October 10.