My second term shall be a reference point in Nigeria, says Akeredolu

I want to be remembered like Awolowo, he adds 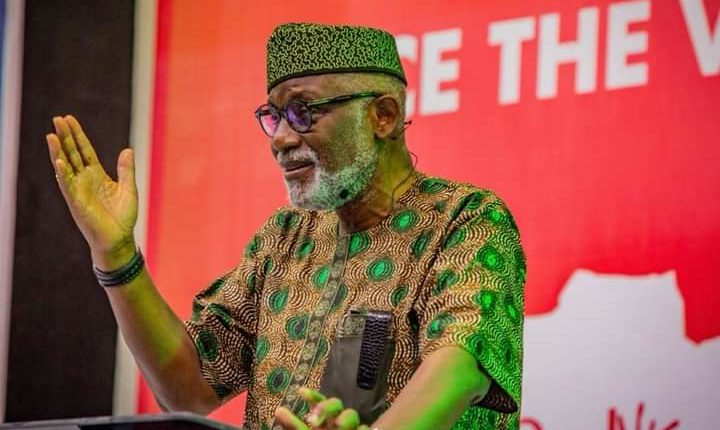 In what could be described as a recap of his first term achievements and an appraisal of his second term agenda, the Ondo State Governor, Oluwarotimi Akeredolu, on Sunday, told the people of the state to expect a purposeful and business-oriented government in his second term if he’s reelected.

Speaking during a debate organised by the state broadcasting corporation, Akeredolu said the first term of his administration was used to initiate policies that would prepare a good ground to push the state towards the pact of industrialisation in line with the vision of the founding fathers of Western Nigeria, saying “my second term shall be a positive reference point in Nigeria.”

Akeredolu also denied the report that his nuclear family members have taken over the rein of governance in the state, challenging anyone with fact to come out to prove that any of his children has been awarded contract in the state.

“Contrary to the belief of many Nigerians that second term governors do not do well, I want to say, today, by the grace of God, that my second term shall be a positive reference point in Nigeria. You know, I wil govern the people without much distractions. I want to return Ondo State to the reign of Baba Ajasin when factories were competing with one another.

“I want to run Ondo the way our sage, Chief Obafemi Awolowo, governed  Yoruba Land. I want history to be kind to me. You see how Awolowo is being remembered today, almost 35 years after he died,  me too, I want to be remembered like him.”

He added that “I’m not yet satisfied with the number of jobs we have created. I am determined to do more. Yes, we have a number of industries that we have facilitated here and I’m proud of that. But I’m saying we can do more.”

“The first HDF plant in Nigeria is in Ondo State. We are talking about the textile industry and the paper mill all at Ore industrial park. These are the things we have brought here. It is for the people to see.

“We have Dongfeng that’s assembling trucks at our industrial hub in Ore.  That’s monumental. Like I said earlier, Ore will be the new Nnewi before 2024. We are talking serious investment here not like those who spent eight years and cleared a vast land in Bolorunduro for truck assembly plant but they only ended up assembling grass.”

On the drive of his administration to have a Deep Sea Port in Ilaje Local Government Area of the state, Akeredolu said: ”We have done what no governor has done in this state. Today, we have the outline Business Case. We have the implementation plans.

“We have taken this to the port authority. It’s leaving there now for the Ministry of Transport. By the time it gets to the Federal Executive Council (FEC), we will get the port declaration. I am sure that there will be a functional port in Ondo State before 2024 by the grace of God.

On agriculture, the governor said “we have introduced the youth on the ridges. We have distributed over 400, 000 improved seedlings of cocoa to our farmers. We have over 10,000 hectares of land at Jugbere for cocoa plantation.

“We have youth on the ridges that has over 1,000 youths in agriculture. We have the agropreneurs that’s being facilitated by the state government and the Federal Government. We have cleared many hectares of land for our youths. We are encouraging our youths to go into agriculture.

On healthcare, Akeredolu said “today, in mother and child hospital, children under the age of five are treated free of charge. But, the mother must have the Kaadi Igbe-Ayo. We have also introduced the Contributory Health Insurance Scheme.

Speaking on his feats on infrastructural development, Akeredolu said: “I want to thank the people of Ondo State because in my travel during the campaign tour we have gone through a number roads that we have constructed. And in so many places people shouted Mr. Infrastructure, Mr. Road. I thank them very much.

“This is because we are passionate about the issue of infrastructure. As you can see in our three and a half years, look at the roads we have constructed. Over 500 kilometres. Look at that redemption bridge in Ore. Several governments have come and lied about it but today, we did it in two years. Look at Oke-Alabojuto in Ikare, Look at Oke -Ogba, we have made history in terms of road construction.”

Eeshoohdee excites fans with ‘No cap’