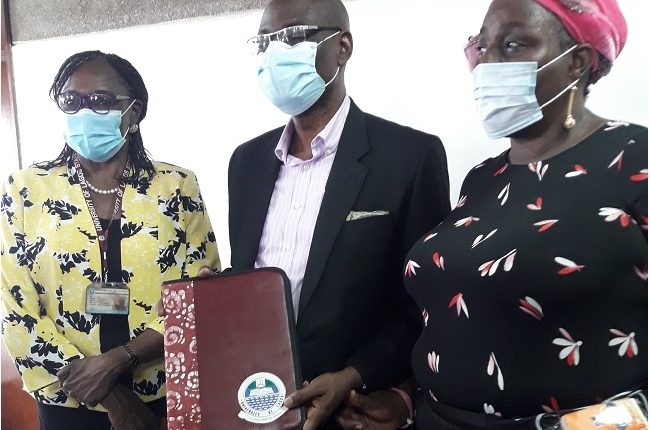 Vice-Chancellor, University of Lagos (UNILAG), Akoka, Professor Oluwatoyin Ogundipe, on Thursday, described his reinstatement to his seat three months after suspension as an act of God and victory for Nigerian public university system.

He said this repeatedly while addressing the university workers and other stakeholders, who thronged the university’s Senate foyer to formally welcome him back on campus and also newsmen shortly thereafter.

Ogundipe, a Professor of botany and who has spent more than 30 years in UNILAG was reinstated on Wednesday by President Muhammadu Buhari as recommended by the visitation panel he sent to the university to investigate issues that caused his earlier suspension together with the Chairman of the then governing council of the university, Dr Wale Babalakin.

Ogundipe, full of praises unto God particularly thanked President Muhammadu Buhari; Vice President Yemi Osinbajo; Minister of Education, Mallam Adamu Adamu; the Executive Secretary of National Universities Commission (NUC), Professor Abubakar Rasheed; and workers and students, parents and members of the public for standing for what he termed the truth, fairness and justice while the imbroglio lasted.

He said UNILAG was bigger than any individual no matter how highly placed and then asked all workers to always pursue collective (rather than personal) interests and be more united and committed to UNILAG as an institution so as to jointly move the university to greater heights.

He said while he saw his suspension as sabbatical and now that he returned to his duty post better and refreshed, the university would certainly enjoy sustainable peace and development.

He said he had only spent three out of five years due for him as vice-chancellor and that his remaining two years commencing on Thursday (yesterday) would certainly be more fruitful for the university community.

Professor Ogundipe, however, dispelled what he called rumour that he would sack some workers perceived to work against his retention as vice-chancellor during the crisis, saying there was nothing of such.

He said there was bound to be diverse opinions on issues in any system among stakeholders and that would not in any way lead to division let alone victimisation of anyone.

“So, let us all go back to our duty posts and be more committed to our roles of engagements in the interest of re-branding our university to retain its position as the university of first choice and nation’s pride,” he stressed.

He said workers should not allow outsiders to divide them rather stand firmly on the path of greatness.

He said he was in constant touch with the acting Vice-Chancellor, Professor Folasade Ogundipe, to know the level of activities on campus while he was on suspension, describing Ogunsola as a reliable and trustworthy co-worker.

When asked about his feeling during the crisis and lessons learnt out of it, he said he didn’t allow the crisis to disturb him rather using the period to move closer to God.

He, however, received the handover note from the acting vice-chancellor, Professor Folasade Ogunsola, around 11.55 am and thanked her for holding forth while away.

Among those on the ground to welcome him in addition to the acting vice-chancellor are the deputy vice-chancellor (Academics and Research), Professor Oluwole Familoni; Provost of the University’s College of Medicine, Professor Folusho Lessi; Director of Institute of Continuing Education, Professor Mopelola Olusakin; Director of Quality Assurance, Professor Grace Sotinwa; Professor Ogundipe’s wife, Mrs Oluwaseun Ogundipe;  and the leaders of various staff unions including Dr Dele Ashiru (ASUU) and Mr Kehinde Ajibade(NASU), and so forth.

8 important points to consider before investing in Forex market