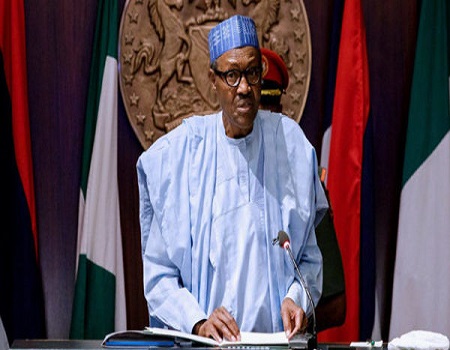 President Muhammadu Buhari has observed that the results of 2019 elections clearly reflected the interest of Nigerians.

Speaking when he received the Buhari Support Group Centre at the presidential villa, Abuja on Tuesday, he said having received the mandate for a second term, he will not disappoint the people.

Buhari stated that his administration will serve honestly and genuinely, with a focus on unleashing the human and natural potentials of the country for growth.

A statement issued by Femi Adesina, Special Adviser to the President (Media & Publicity), quoted the President as saying: “The 2019 elections are behind us. Nigerians have spoken, and they have spoken loudly in our favour. It is now time to serve them, and serve well. We will not fail.

“We will serve honestly, genuinely, and with our heart and might. Our country has oscillated for too long at the level of promises and potentials. It is now time to explore and exploit the potentials for the good of all Nigerians, particularly the ordinary people. It shall be accomplished,’’ he said.

The President commended members of the Buhari Support Group Centre for their steadfastness, assuring them of inclusiveness in pursuing the goal of good governance for the country.

“This group is composed of people who have identified with me since I threw my political hat into the ring in 2002. And they have stood with me through thick and thin, abiding with me in the electoral and legal processes of 2003, 2007, 2011, till God gave us victory in 2015, and also 2019.

“Many more people joined us along the line, and the Centre expands by the day. I salute your faithfulness, your persistence, and your ruggedness. It never ceases to amaze me that you have kept the faith, even when I have not given you much, or even anything, in return,’’ he added.

President Buhari said the group’s interest in the growth and development of the country through good and honest governance, and not personal gains or interests, will be remembered by posterity.

In his remarks, the Director General of the Centre Alhaji Umaru Dembo, assured the President of the continuous support of members for the actualisation of his mandate for Nigerians, noting that the Centre had already started work on institutionalising the philosophy of “Buharism’’.

He said the Buhari Support Group Centre will be renamed Buharism Centre in order to share the political vision and philosophy of President Buhari.

Bayelsa king suspends council of chiefs, youths body over attempt to impeach him