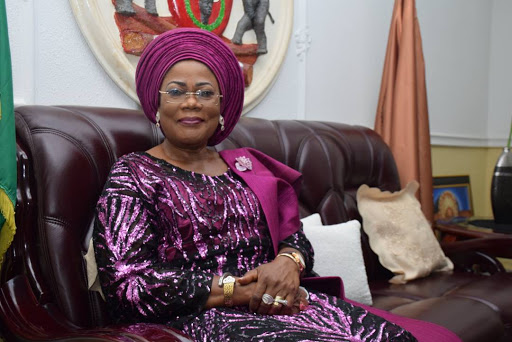 As more revelations emerged on Wednesday night on the hundreds of looters that stormed the Osogbo GRA residence of the former Osun State Deputy Governor, Otunba Grace Titi Ponle-Tomori, a police orderly attached to the politician has been reportedly beaten blue-black by the hoodlums who attacked the residence.

He said to have been attacked when he tried to stop the looting particularly in their attempt to steal the motorcycles in the premises.

The former deputy governor who made this known in a telephone conversation with newsmen in Osogbo added that her housekeeper ran for dear life when she was attacked on an ill-fated day.

According to her, the looters made away with her home appliances, electronics and musical equipment worth millions of naira, vandalised the chapel where prayers are held and carted away from a keyboard, television set, fridge, projector and the machines she uses to produce garri.

“Not done, the mob stole all the foodstuffs in the premises including bags and packs of garri produced for sale in my farm and fish feeds that I use to feed the fish in my pond”.

During the lockdown occasioned by the COVID-19 pandemic, Otunba Laoye-Tomori hinted that she purchased foodstuffs and other palliatives which she distributed to vulnerable people in Osogbo, Olorunda, Orolu and Irepodun Federal constituency.

She said, “maybe this attracted them thinking we still have more items in the residence.”

The former deputy governor, however, expressed sadness that anyone could be wicked to attack her house under the guise of protest. In her words, “I am not in any position. I am not in government. I was a Deputy Governor. I did not steal any money. I wonder why they attacked me.”

She, however, said the looters need empathy and prayers for forgiveness because “it was hunger that drove them. May God rehabilitate Nigeria. We felt pained for them and pray for them,” she added.

Africa loses $50b to looters ― EFCC