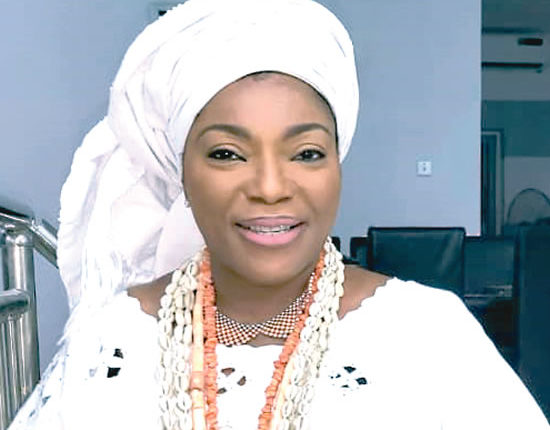 You seem to be in love with customs and traditions; in spite of your background as a city girl. Why is that?

Yes, I was born in the city, but my parents were traditional people; even though they lived in the city, they never forgot their culture and tradition. It was what they inculcated in us. When we were young, they took us to the village and we celebrated several festivals with the locals, particularly at Christmas time, to celebrate the ‘Owa Day’ which was usually on December 26 of every year. So, it is an in-born thing, not only for me, but for all my siblings, to appreciate and cherish our culture and tradition.

Who were your parents?

My parents, of blessed memory, were Chief Oriade Wellington and Chief (Mrs) Omotayo Wellington. My father was from Owatedo-Ekiti (part of old Ipoti-Ekiti), while my mother was from Ejiyan-Ekiti (also a part of old Ipoti-Ekiti). They left the town to live in the city and in the process, became aristocrats. They, however, never forgot their roots and culture. So today, I believe in the legacies they left behind; the legacies live on.

We were a family of 10 siblings. Three of us are late, leaving seven.

What about your educational background?

I am fairly educated. We went from kindergarten in a private school in Lagos to St. Jude’s Primary School, Ebute- Meta. I had my secondary school education in the North, precisely at the Federal Government Girls College, Bida, Niger State, before coming back to attend the then Adventist Seminary of West Africa (ASWA), Ilishan-Remo, now Babcock University. I went to further my education in England where I obtained a Bachelor’s degree in Business Studies & Finance. I also obtained a Bachelor of Science in Building Technology from London Southbank University afterwards.

How was growing up?

We grew up locally in Lagos Mainland. As I said earlier, our parents took us to the village during festivities, particularly in December, at a period, we would celebrate the December 26th Owa Day. We lived an open life. Although our father was a socialite, we the children lived a conservative life and were not allowed to be ‘street wise’. Our growing up in Lagos was within the Seventh-day Adventist circle and we related very well with others. No matter where you came from, there was no discrimination. That registered in everyone’s brain and we were bonded as one SDA family. My mum, in particular, had so many ‘aburos’ (‘younger siblings’), even though, she was a lone child. My father on the other hand, had a lot of cousins – the Olayomis, the Akandes, the Olarinmoyes, the Adewunmis, the Omotoshos and many more. We all grew up like brothers and sisters. I don’t think a word like ‘cousin’ was even used then. I attended ASWA while some of my siblings went to other SDA schools. SDA was a family; in fact, my husband was baptised into SDA. That’s the kind of background I had.

How and where did you meet your husband?

Very interesting! Being an Adventist, in those days we didn’t dance in the church. We had annual harvest events, but not as it is done now. So, I have always loved the Celestial Church of Christ for the dance. One day, I was invited for a festival and on getting there, I just loved the dance and the music. That was where I met my husband and that was how we moved on. I started attending the church for fun. And one day, I needed someone to attend to an issue. I didn’t have many friends and I was living with my sister who was away on holiday at that time. I needed someone to fix my door and I told the church secretary. Then, the guy just came, I didn’t know he knew my address. He just came and said ‘I can fix your door for you.’ That was the first time he came; I wanted to give him the address and he said ‘No, no, I know the place.’ And from then, we became friends. After church service, he would give me a ride home. Somehow, we realised we were living about five minutes walk from each other, you could stay in front of one of our houses and be looking at the other. So, one thing led to the other. From him helping me, I would visit, ‘Oh, you’re there! Aren’t you lonely? And so on. He had a sister and we would play games together.

We became friends first; genuine friends. If I had any issue, I would go to him and vice versa. That’s how we became close.

So, when did you eventually get married?

We have two wedding dates. You see, we were both living in England and wanted to get properly married before living together. Luckily, my mum was in England and his father was also there. So, his father came to talk with my mum who had to get my father’s consent. The two families met and my parents gave their consent for me to marry him; so, we had a quiet wedding in England. But of course, that would not suffice for my father who was a big socialite. That was around late 1984. In 1989, we came to Nigeria to have a big traditional wedding and have our marriage solemnised. However, before we got married in England, my husband got baptised as an Adventist and we moved on. You know, the Nigerian system in those days, you want to get married, the family wants to get involved; the father, mother and everybody wants to be seen. When we were ready to come to Nigeria in 1989, we did that.

How do you combine your role as a housewife, career person and a mother?

I think it is a habit I picked from my mum. My mum was very hardworking and a multi-tasker. She would wake up early in the morning, take care of us, set about her business and would still come back home early to cook. She cooked fresh food every day. In England, I go to the market on Thursdays and get things fresh. My husband doesn’t eat the same soup every day. If you cook something in the morning, he would eat something else in the evening; if you cook something today, he’ll not eat it tomorrow. We don’t throw food away. I go early in the morning, come back around 5:00pm and cook before he comes back from work. I don’t find it difficult since it has registered in me that it’s something I have to do. Even till now, the only thing another person can do for me is clean. We have cooks, but they can’t cook for my husband. Even with my status as a CEO, I still have to oversee the cooking myself. I’m used to it.

What’s the nature of your business?

Now, I have Sudipal Limited on which we both (husband and I) sit as directors. It is an umbrella company that acts as a payroll bureau for agency staff for people that work and we are the agents that assess their bills; they work and get paid through us. They work, we calculate their pay and take a percentage of that. An arm of the company is Sudipal Oil & Gas in Nigeria. Apart from the companies overseen by us, we have other businesses. Now, we are trying to build a school, a skill acquisition centre. This came as part of my hobby. When I lost my mother in 2013, I started a charity in her name ‘Omotayo Wellington Foundation.’ It is that charity that serves as my hobby. With that, I am able to do charity work in different areas in many villages across Nigeria. We try to assist orphans and widows, particularly the girl-child, to ensure we train them in education or vocation for them to live a better life. There is another project keeping me in Nigeria, humanitarian project, to keep some youths off the street. Most times when I drive around, and they call some people ‘Omo Orita’, I feel bad. I have spoken with them and found that some of them have written themselves off. But I have been able to sit them down and speak with them. I want to see how we can come in, train them in identified areas, whatever skill they need to acquire in order to get something out of themselves.

What do you do at your leisure time?

You would not believe it, that is a million dollar question for me. My relaxation time is when I’m looking for solutions to another person’s problem. It’s either I’m on the phone, or jumping from one place to another to work out a charity programme and it is family restricted. This is because I believe it should go to people who need it, not just anybody. It is not meant to just dole out money anyhow, but to fill the gap for those that are under privileged.

So, my relaxation is about what I am doing. I go to motherless babies homes, I have some charities that I work and do some activities with. That is the best way for me – anything that will lift the spirit of the under privileged is my relaxation.

What moments would you consider as your happiest and saddest?

My happiest day is when I see a smile of appreciation on an under privileged person’s face. Any day, anytime I see a smile or I am able to bring a smile on the face of an under privileged, that would be considered as my happiest day. As for the saddest moment, that day can never be equated with anything; nothing could be worse for me than the day I lost my very beloved brother, Adetunji Wellington, on July 9, 2003. It is a day I live to always remember.

However, instead of being sad, I try to remember the great moments we shared and I am still committed to doing something in his memory which I hope to unveil soon.

What are your likes and dislikes?

I am a free bird. The best people I live with are people that are straightforward. I find it difficult when people are deceitful or shady, it puts me off.

People make mistakes, of course. When people make genuine mistakes, it is not difficult for me to handle. But when people are deceitful or not straightforward, I cannot relate with them because I am so open. My ambition when I retire, is to look around me and find people I have been able to impact their lives, smiling, becoming somebody which I’m sure will happen by the grace of God. With that, I can close my eyes and rest in peace. I’m not here to accumulate wealth to myself. I believe my purpose in life is to impact lives; that’s my ambition, to one day see so many people I have impacted coming up with success stories, whether they remember me or not. With that, I can sleep peacefully and be happy.