My opponents organised my burial, killed cows and even hired a live band — Oba Wahab 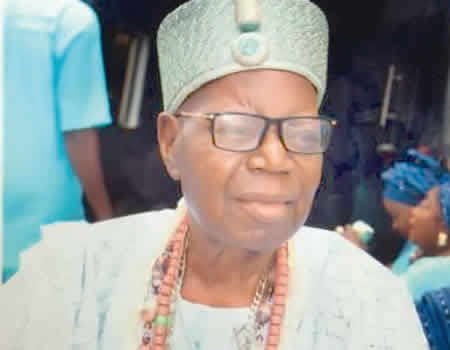 Oba Wahab Ayinde Balogun, a nonagenarian and first-class traditional ruler in Lagos State is the Oba of Isheri-Olofin kingdom. He told the story of his life to TUNDE ADELEKE.

WHAT was your growing up like in those days, sir?

I was born at Isheri-Olofin here in Lagos State on  January 4, 1927. At the time of my birth, our village was still located at Iyana-Odo at the back of Diamond Estate before we moved to this present site. My father was actually born here too; he died at about 85 years old.

I was very young when we left the old Isheri. I started my education at the United Primary School, Okunola, Egbeda, from where I proceeded to Bishop Oluwole Memorial School, Agege, an Anglican school, on Ifako Road, 1941 to 1947. I left the school in 1947 to Colony School of Commerce on Lagos Island, a Baptist school on Ajele Street between 1948 and 1950.

Thereafter, I was trained as a customs agent at Williams Commercial Agency/Arab Brothers. I also studied shipping and transportation/customs in a French company, ICOT (Transcot), Apapa Wharf as a transit officer between 1952 and 1960. I was later transferred to UMARCO Shipping Company where I was appointed chief clerk in charge of transport between 1960 and 1962. Soon after, I resigned from UMARCO, Apapa to join the United States Embassy as Senior General Service Assistant in charge of shipping and transportation in October, 1962. I stayed long with the embassy.

At the embassy, I was assigned to West African Consolidated Administrative Supply Centre (WACASC), Ikeja where I was responsible for the shipping and transportation of all American Embassy properties, both within Nigeria and overseas. There was no shipping landing areas in the entire West Africa at the time; so, if you want to send anything to the United States, you have to go through Lagos. I was in charge of WACASC and became one of the most senior African employees as customs specialist. While at the embassy, I travelled far and wide, touching almost all the countries of the world, including United States, United Kingdom, Monrovia in Liberia, Ndjamena in Chad, other African countries and many other countries across the globe. I was in charge of training of American people in customs and transportation. When diplomats were posted to Lagos, Americans or nationals of any other country that were transferred here, before they started moving round Lagos, I was the one to take them round. I was later put in charge of the warehouse for all foreign goods. I left the embassy in August 1978.

Did you have challenges working there?

Of course, I faced many challenges, and the challenges actually strengthened me and made me rise to become one of the most senior African employees at the embassy. In the embassy, there was a limit to where one could reach. As an African, you can’t rise beyond the position of an assistant in shipping or any other department. My last grade was customs specialist. That was the highest I could be.

I headed a very large department while I was there and as is customary, our people (blacks) didn’t like others to rise. I faced a lot of challenges with them, but God helped me and honesty as a virtue also helped me because no single African ever got to a top position there without being accused of misdemeanor. Many of those who worked under me in the department were involved in shady deals. I was the one in control of drivers, mechanics and others.

Would that compare with the challenges of ascending the throne?

My own was outstandingly terrible.

Because opposition against my candidature was not from within. It was not the Isheri-Olofin people that opposed me; it was external forces, especially a neighbouring community in 1983 when I was approached by my people. I actually did not know I would become a traditional ruler. I was at the embassy when they invited me to come home. I was involved in partisan politics and had served as a councillor for Isheri under Ikeja division. I joined the defunct National Party of Nigeria (NPN) during the time of the late MKO Abiola in the party and that almost cost me the crown. The story is that people from the said neighbouring community who saw me as a threat if I became the Oba of Isheri-Olofin went to Alhaji Lateef Jakande, the then governor of the state, to say that I should not be appointed because I belonged to the NPN.

I went to meet Jakande; the then deputy governor, Rafiu Jafojo and Akinyemi arranged the meeting between me and the governor. I was clearly the choice of my people, but the neighbours who saw me as a threat didn’t want my nomination to be approved. So, we went to Alhaji Jakande. There and then, I pledged my loyalty. I even went as far as announcing my resignation from the NPN on the radio and pledged my loyalty to the government. Yet, my opponents still complained that though they heard my announcement, it was not genuine.

Have you ever had any experience in community service before ascending the throne?

Yes, of course. I was appointed councillor, Ikeja District Council, in 1969. I was then chairman for Motor Park; chairman for health and was also appointed as a member, education committee. I also served as a member, Board of Governors, U. L. A. Grammar School, Oshodi, between 1969 and 1976. I served as member, Lagos State Sports Council, 1976-1977. I was also a member of Alimosho Local Government chieftaincy committee. I tried my hands in private business too as chairman of B. Wab Enterprises, serving as poultry manufacturers’ representative and dealing in general contracts from 1978 to 1984.

So, how has it been on the throne?

Well, it’s been God Almighty and I have to thank Him because of the experiences I have had. Before my formal installation, my adversaries announced that I had died and they went on jubilation. They bought and slaughtered cows, hired a musician to celebrate my purported death, which they perceived as a victory for them. The opposition was much, so much that they, in fact, could not believe their eyes when I countered their announcement with my own announcement that I was alive. I had to take my car and drive around, yet they refused to believe. It had to be so because they had already started rites of passage, including shutting the market and other things. As a matter of fact, many people ran away when they saw me, thinking I was a ghost.

The current challenge now is that of a man who is giving me headache over the landed property of Isheri-Olofin. He started the trouble in 2010, having realised that his job was over after judgment was given in favour of my community. He was hitherto benefiting from my opponents who lost the case. He writes petitions all the time and each time we are invited by the police, he won’t come. He has jumped bail more than three times and he’s wanted by the police. He even threatened to sue the Lagos State government over the Oba of Isheri-Olofin stool. I would have ignored him, but we resolved not to because people might believe the lies if not countered.

Can you tell us your achievements after 35 years on the throne?

I am happy that what my forefathers could not do, I tried to achieve. The landed property of Isheri-Olofin was so large, but was taken over by our neighbours since 1892. To the glory of God, I have recovered all. I won the property back via a court judgment in 2012 after 32 years of legal tussle. Some of the lands taken by my neighbours have been recovered.

What are your happiest and saddest moments?

I always thank God that He has done well for me. The worst thing and the one that baffled me most was the death of some of my children in quick succession, about four of them. One was 63 years old, another was 69 years old. I lost four of them. However, the happiest moment was when I was installed. I shed tears when the crown was put on my head. It was tears of joy. I promised my people that I would help them. There was a time, in the face of the storm, when the heat was too much, I wanted to withdraw, but I was warned by my ancestors in my dream never to do so.

How do you combine tradition with your faith as a devout Muslim?

I worship everything. I worship Yemoja, I worship Osun, I worship Obatala, I worship Ogun and I worship Esu. I associate with Christians, I welcome Muslims, they all come here to pray for me everyday.

Do you believe in a traditional ruler having one wife?

It is only these days they go for one wife. It’s customary for an oba to have women around him because they form the pillar of support. As a typical traditional ruler and an old one for that matter, I strictly maintain tradition in that regard.

What about your social life?

I was involved in many social activities when I was younger, but I am still a member of many clubs which include Ikeja Club, Rotary Club of Agege, Awori Welfare Association and Awori Obas Consultative Forum.

What is your favourite food?

As a true Awori, eba it is. But now that I have been advised against eating it by doctors, I have switched over to pap, pounded cocoyam with richly-prepared vegetable.

At old age, I relax here and sleep. But before now, I drank a lot. I would take beer and hot drinks. My favourite hot drinks included White Horse, Long John, Jonnie Walker and whisky.

What are your hobbies?

I observe you read without glasses even at 92?

I struggle to achieve that in the traditional way. In addition, I still retain the services of an eye doctor.

What about intimate relationship with women?

If I dare stop that, they will run away. It may be once in a while though, not necessarily all the time.

From firewood to gas: Nigerians speak on why they follow modern trend in domestic cooking

Dying for love: 17-yr-old girl set self ablaze over delay in getting married

How bandits, terrorists, other criminals get their weapons —Retired Col. Majoyeogbe,…

With Gov Makinde we’ve a major shift from the past —Gbadamosi, Surulere LG chair