My life would have been better, had I become a terrorist, girl in IDP camp laments 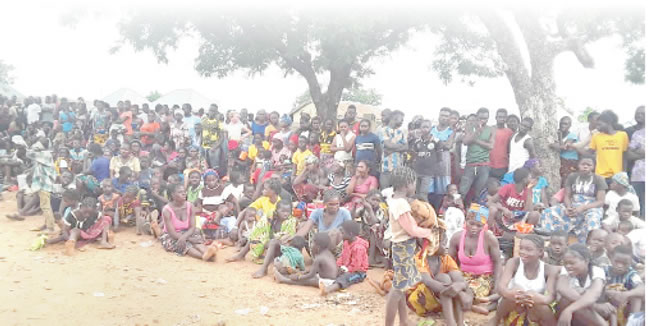 Recently, when the federal government revealed that it had rehabilitated hundreds of ex-Boko Haram militants,  not a few Nigerians were surprised by the revelation. Many were in fact aggrieved that while the federal government was busy rehabilitating and remolding the militants, their victims continue to suffer on a daily basis in the Internally Displaced Persons camps with no electricity and meaningful infrastructure that could make life comfortable for them.

In Taraba State, one of the flashpoints of the Boko Haram insurgency, stakeholders believe the federal government’s efforts at rehabilitating the insurgents would backfire as it would be tactically encouraging terrorism. Some of them believed government’s action must have stemmed from lack of understanding of the implications arising from such efforts for some of them, government should have concentrated on rehabilitating Boko haram victims and preparing them psychologically for the task ahead rather than spending a fortune on their tormentors.

He described the development as “ungodly, as it may push some good citizens not to shun terrorism with the mindset that they could also subsequently repent, be forgiven and rehabilitated.

“In this camp where I am the coordinator, life has not been conducive with the inmates taking turns to sleep due to the inadequate space and sleeping materials.

“One could easily mistake the population here for a village market, scene of an annual festival or church convention; but in reality they are displaced persons who have been sacked from their natural habitats due to one crisis or the other.

“It would shock you that for more than one year now, these people have been staying here, the federal government has not for once sent relief materials to help them. But their attackers are now dining with the government that is supposed to protect the lives and properties of its citizens.

“I want to state here that the Federal Government is not being fair to these innocent Nigerians that we believe are capable of contributing to the development of the nation and i think the government needs to be properly advised to refocus its efforts as far as fighting insurgency in the country is concerned in order to save its reputation of the country and integrity within the international community,” Fr. Dogo expressed.

In her own view, with a benefit of hindsight today, Miss Abigail Tyonongu, an SS3 student of Government Secondary School. Wukari said that had it been she was a boy, she would have loved to be a terrorist now that the Federal Government is focusing onrehabilitating ex- terrorists.

Abigail added that life wouldn’t have been so devastating, if things had been different and she was a terrorist.

“I would have repented (like others later did) and today I would be living well courtesy of the federal government unlike the way I am living today.

“I and many people here have spent over one year in this camp.

You can imagine the population on ground here and what we experience, especially when it’s raining.

“I am supposed to be among those writing SSC Examination which started recently in the state, but I can’t go to Wukari because it is a danger zone for me.

“I want to believe that the federal government doesn’t know the implications of what they are encouraging in our society.

“How do you expect me to live happily with some people who killed my parents and relations and who have mortgaged my future for reasons best known to them?

“I am even suspecting that the government itself is behind this evil act being perpetrated against us. If not, why is the government treating the repentantBoko Haram members as kings while we, the victims, are not being taken care of?”she lamented.

In his reaction, the Permanent Secretary, Taraba State Emergency Management Agency, MrNulvanga Dan-Habu, expressed dissatisfaction with what he described as negligence by the federal government.

He lamented that when the rehabilitation process started, it was believed that victims too would benefit and other problems would be solved too but it has not turned out to be so.

“When the Federal Government started this Boko Haram rehabilitationprogramme, Nigerians believed it was part of a holistic process to end banditry and Boko Haram insurgency in the country and reunite every displaced person with their families.

“I wonder who is advising President MuhammaduBuhari in this manner, that those who have almost mortgaged the country’s economy through their evil ways of banditry and terrorism are the ones to enjoy while their victims at various IDP camps are suffer.

“I advise the Federal Governmentto have a rethink on this issue before the frustrated good Nigerians start thinking in a way that may further see an upsurge in cases of terrorism in the country,”Dan-Habu, said.