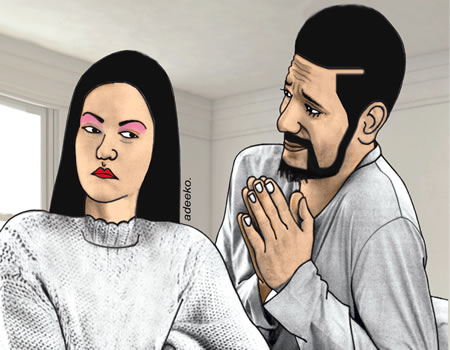 Oriyomi sought for divorce on the grounds that her husband was irresponsible.

The plaintiff stated that she invested all she had in her husband’s business adding that she went as far as borrowing money from banks to help sustain it, but that her husband had nothing to show for these.

Oriyomi explained that despite buying her husband two vehicles for transport business, he still failed in his responsibility to take care of her and their children.

According to her, Idowu was always coming home empty handed and would demand for food.

Oriyomi added that she was indebted to the co-operative society she borrowed money from to boost Idowu’s business and that they didn’t let her be till she paid the last kobo.

The plaintiff stated that the defendant not repentant almost wrecked her as he took to stealing her money.

Oriyomi said anytime she accused her husband of theft, he would deny it and beat her blue black.

The plaintiff explained that this had been her ordeal since she got married to the defendant 20 years ago. According to her, she wanted a stop to it.

The plaintiff thus prayed for divorce.

Oriyomi further prayed for the custody of their children whom she feared Idowu’s irresponsible ways would rub off on them if they remain with him.

Idowu did not deny any of the allegations brought against him, but refused that their marriage be dissolved

According to the defendant it would be difficult to get a new wife if his divorces him because he was already advanced in age.

Idowu admitted stealing his wife’s money from her safe. He told the court he used it to pay off the debt he was owing.

Testifying before the court, the mother of three said: “My lord, I see no future in my relationship with my husband. I have thought things over and come to the conclusion that we should go our different ways.

“I dedicated the whole of my time to my husband for the 20 years we have been married and pumped money into his business none stop, but he has nothing to show for these.

“Idowu has proved to be an irresponsible husband and father.

“I borrowed money from the co-operative bank and handed it over to him to run his business, but he squandered it and couldn’t account for a kobo out of the whole sum.

“The bank stood on my neck; they didn’t let me be until I paid back all the money.

“My lord, Idowu became a nonentity both at home and among his friends. To save his face, I again dipped hand into my savings and added a loan to it and used this in buying him vehicles at two different occasions for his transport business, but as usual all the investments went down the drain. The vehicles ended up been a wreck.

“My husband would return home with nothing and would expect to eat. Idowu would turn the whole house upside down if he met an empty table or found a cold kitchen.

“He would always send our children to me anytime they made demands of him.

“Not done, my husband took to stealing my money. He has almost wrecked me doing this.

“Anytime I accused him of theft, he would deny it and beat me blue black.

“Idowu is obviously an ingrate and a brute. Despite all I did for him, he still has the effrontery to raise his hands and hit me.

“My lord, my mind is made up on divorce. I pray that you separate us and grant me custody of our three children. I don’t want his ways to rub off on them,” the plaintiff stated.

The defendant while responding said: “My lord, I refuse that Oriyomi and I be separated.

“Where will I get a new wife if she does? I’m already advanced in age and don’t desire to start marriage all over again.

“It is true I took money from her safe. I used it to pay off the debt I was owing.

Giving judgment, the court president, Chief Ademola Odunade, dissolved their union in the interest of peace.

He granted custody of their three children to the plaintiff and ordered the defendant to pay the sum of N15,000 every month for their children’s upkeep and be responsible for  their education and health care.