My husband stripped me naked, dealt me punches, stabbed me with a knife, woman tells court

•She grabs, squeezes my scrotum each time I demand for sex —Husband 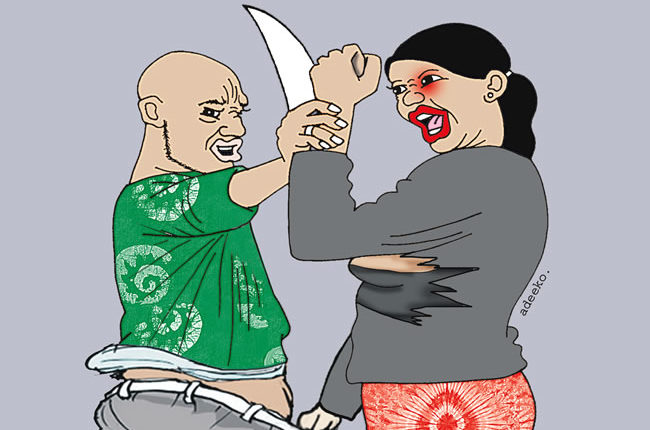 Abiodun who dragged her husband to court accused him of irresponsibility, battery and violence.

She thus prayed the court that if her prayer was answered, it should grant her custody of their only child who is a female and four years old.

Azeez agreed to divorce but denied all the plaintiff had said.

Giving his judgment after he had listened to both parties, the court president, Chief Ademola Odunade, observed that there was a strain in their relationship.

He added that it was imperative that an end be brought to their wedlock because it involved violence.

Ruling, he declared their union dissolved and granted custody of their child to the plaintiff.

The defendant was mandated to pay the sum of N5,000 per month for their child’s feeding and be responsible for her education and health care.

“My union with Afeez has brought me no joy and I wish to end it,” Abiodun told the court.

“We have been living separately for the past three years because our marriage never worked.

“I was living like a widow while under his roof. He took up no responsibility in the home.

“I was the one feeding and clothing him and our child for the years we lived together and what I got as reward were severe beatings.

“He made life miserable for me and left me shattered.

“I summoned courage one day and decided I was going to leave and live without him.

“I moved out of his house three years ago with our daughter but he still didn’t let me be after he discovered where I moved to.

“Afeez never ceased to present himself as a nuisance. He will come into my apartment uninvited and rain curses on me.

“He always comes with dangerous objects and will hurt me with them.

“He will thereafter destroy my property.

“The last time we fought, he tore my clothes, left me stark naked and descended on me with punches.

“Afeez stabbed me with a broken bottle after beating me to a pulp. I bled profusely and almost fainted.

“He came back at another time and forcefully took our child away from me.

“Our daughter now looks frail and malnourished due to hunger and neglect.

“I appeal to this honourable court to rule that Afeez hand over our child back to me in this court today.

“Afeez has added nothing unto me except woe since we got married.

“I, therefore, entreat the court to separate us,” she concluded.

According to him, he derived no pleasure or satisfaction in their marriage because it is void of sex.

“My lord, Aboidun is free to go. I’m tired of fighting and struggling with her before we have sex.

“Any time we have a misunderstanding, she would take it back on me by denying me sex.

“Each time I demand for sex, she would resist me and struggle with me on the bed.

“Abiodun would on many occasions grab my scrotum and squeeze them. She would not release them until I scream.

“I didn’t tear her dress. Neither did I have the intention of stabbing her with the bottle. She got hurt by it while struggling with me.

“My lord, I also pray that the court end our marriage, the defendant stated.

WITH CARROT CAKE, YOU TASTE GOODNESS