My husband raped me, forced his sperm down my throat, woman tells court

•No marriage without its challenges —Husband 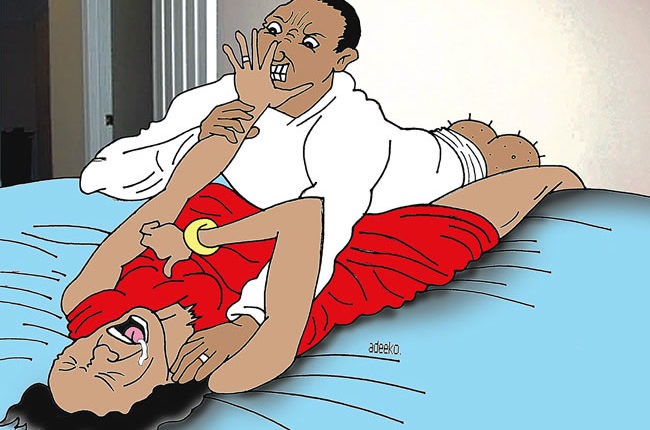 Ile Tuntun Customary Court, Mapo, Ibadan, Oyo State, has adjourned a divorce suit brought before it by a woman, Kafayat Oladejo against her husband, Tajudeen Oladejo.

Kafayat in her suit claimed that her husband was uncaring and that he neglected her and their four children.

The plaintiff added that the defendant once raped her and forced his sperm down her throat.

She thus prayed the court to stop their marriage and put their four children in her care.

She further employed the court to make her husband responsible for their education and general welfare.

Tajudeen did not agree that their marriage be dissolved.

Contrarily to what his wife said, the defendant told the court he was alive to his responsibilities at home.

He stated that he was supportive of his wife while courting and even after they got married.

“My husband has no conscience. He maltreated me and the four children in our marriage,” Kafayat stated while giving her evidence.

“Tajudeen stopped giving us feeding allowance a long time ago. I saw to it that our children were well fed and properly clothed.

“My husband contributed nothing towards the running of the home but he would fight me over food.  He always expected me to cook and served him food without giving me a dime. This constantly caused crisis in our home.

“The only duty my husband carries out towards our children is paying their school fees.

“Tajudeen is indifferent to my welfare. He cares less if I lived or died.

“I once took ill and had sleepless nights. My husband told me that if I die during the sickness, he would mourn me for only three months.

“I went through some unpalatable experiences after this which almost took my life but my husband showed no concern nor gave me his moral and financial support.

“I went to urinate one afternoon and saw a snake crawling towards me. I screamed and this caught the attention of my husband and mother in-law.

“I felt quite unsettled within me after the snake escaped but my mother in-law calmed me down. She assured me there was nothing to be worried about.

“As a nurse, I went to treat a patient in his home the following day and was bitten by a dog. I treated the bite but later took ill. My whole body was itching me and I never stopped scratching my body.

“I went for a medical check up at the University College Hospital (UCH), and ran some tests but they couldn’t diagnose any ailment.

“I was advised to seek spiritual help and I did. I spent through the nose before I got healed. The spiritual fee was N300,000. I had to borrow this since I had already exhausted all I had on me at the UCH.

“My husband stayed aloof and refused to contribute a dime towards the offsetting the N300,000 debt.

“Tajudeen’s maltreatment of me turned our relationship sour and we stopped relating as husband and wife.

“My family members who were initially oblivious of the differences between Tajudeen and I, waded into it when they got a wind of what was happening between us.

“They held meetings with my husband and his family members 15 times to settle our differences but all their efforts met with a brick wall.

“My husband became more and more hostile to me. He refused that I went out and dehumanized me.

“My lord, my husband once locked me in the house and raped me. He forcefully had sex with me and forced his sperm down my throat.

“I moved out of his house after this.

“My lord, I’m no longer interested in our marriage. I pray this court to separate us and put our children in our care.

“I also entreat the court to make him responsible for their welfare and make their education of upmost importance, “Kafayat pleaded.

Tajudeen in his testimony said, “Kafayat has no ground to accuse me of neglect because I started showering care on her even before we got married.”

He added that, “I consistently gave her money to augment what she was given by her aunt who she was living with then while training as a nurse.

“I saw to it that her boss released her so that she could start her trade after she was certified eligible to practice.  I spent through the nose the day she graduated.

“I have never stopped carrying out my duties towards her and our children. I cherish my family and do take care of them.”

The defendant further stated that, “My lord, I don’t agree that Kafayat divorce me.

“I had always sworn never to marry a nurse because of their immoral lifestyle but I changed my mind when I met my wife.

“Kafayat’s innocent and plain nature attracted her to me. On getting close to her, I discovered she was a straight person and also honest.

“My lord, no marriage exists without its challenges and ours is not an exception.

“I got married to Kafayat the proper way-that is through her family members and they are not aware that she has dragged me to court for divorce.

“This is one major reason I refuse that our marriage be dissolved,” he concluded.

Ruling after he has heard both parties, the court president, Chief Olasunkanmi Agbaje adjourned the case till February 8 and asked both to come with their children and family members.