My husband put knife to my throat, forcefully had sex with me through diabolic means, woman tells court

•She denies me sex, leaves me to burn every night —Husband 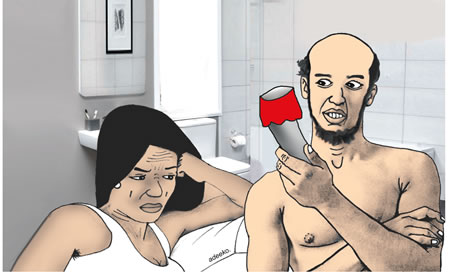 Wuraola had sought for divorce on the accounts of irresponsibility and battery by her husband. She added that he was diabolic and often threatened her with juju.

The plaintiff also pleaded for the custody of their three children while she implored the court to restrain her husband from coming to harass her in her new place of abode and work place if her prayer of divorce was granted.

Oladimeji refused to come to court after being served a court summon and court hearing.

Wuraola in her evidence told the court, “My husband is not interested in my welfare and that of our children. I feed and clothe our children since he never considers it his responsibility. I went further to enroll them in school and have been paying their school fees and he feels good about it.

“Rather than appreciate me, he treats me like a rag and violently abuses me. My lord, if you don’t end our marriage he will kill me.”

“Oladimeji derives pleasure in beating me. He hits and harms me with any object at his reach anytime we have a misunderstanding.

“He doesn’t stop at these. He comes to my office to fight and disgrace me. It is no more a secret in my office that I’m experiencing storms in my marriage.

“My lord, my husband is diabolic and in the habit of threatening me with juju. He always intimidates me with fetish objects which he placed in different spots in our apartment.

“Our son caught him burying a fetish object in the ground behind our house.  According to him, his father made incantation on the object calling my name and that of my mother before burying it.

“He led me to the spot and I dug out the object which was scary.

“He had attempted to poison me at different occasions while he forcefully had sex with me through diabolic means.

“We once fought and he waited till it was deep in the night and he laid a knife to my throat. I would have been dead but for God.

“Not yet done, he arranged for armed robbers to attack me. Fortunately for me, they only made away with my purse which had only my handset in it, “the plaintiff stated.

The custody of the children was awarded to the plaintiff while the defendant was asked to pay the sum of N15,000 per month through the court for their upkeep.

The defendant was further mandated to be responsible for their education and health care among other needs.

A copy of the judgment was to be served the defendant.

‘He spends all his resources on alcohol and Indian hemp, has turned our apartment into a chimney’

‘Our neigbours always know when we have sex, ’cos my wife yells, curses, draws knife…