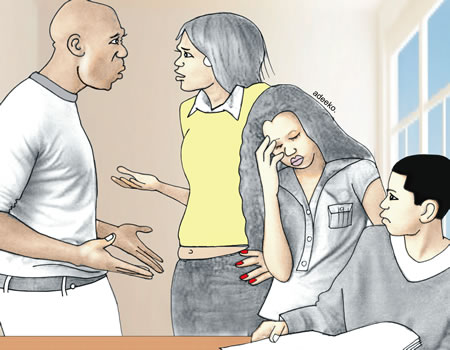 Adenike in her divorce suit claimed that her husband was a brute and that he never ceased to beat her even when she was pregnant.

She added that he daily shelved his responsibility in the home and had passed the lot to her.

The plaintiff told the court she was not interested in going further in her marriage and thus pleaded with the court to separate them.

Sheriff acceded to divorce. According to him, his love for Adenike has waned and their marriage can no longer work.

The defendant prayed the court to grant him custody of their five children. He further entreated the court to warn her from coming to fight him in his house or work place or demand to see the children at awkward times.

Adenike stated that: “I’m not ready to die now. I want to enjoy the fruit of my labour which is why I have come to court.

“My husband is bent on beating me to death and if he does our children will suffer.

“Sheriff beat me at every given opportunity. He didn’t desist from this even while I was twice pregnant. I bled and almost lost the pregnancies on both occasions.

“Sheriff hates to contribute towards the running of the home. He has never seen it as his responsibility.

“His only responsibility is to eat not caring to know how I got the money to prepare the food.

“Any time I call him to be up to his responsibilities he would fight me and beat me to a pulp.

“He also doesn’t care about our children’s welfare-their feeding and schooling are not his concern.  He is gradually losing our children’s respect who see me as the bread winner in the home. They hardly ever ask him for anything, “she said.

The plaintiff added that: “Sheriff relates with my parents with disdain. He is always rude to them which made them maintain a distance by stop coming to our home.

“My lord, I’ve had enough of my husband’s atrocities.  I pray that you separate us and grant me custody of our children because he can’t take care of them,“the plaintiff stated.

“Adenike can go if she so wishes, but I entreat this honourable court not to grant her request to have custody of our children.

“I have achieved nothing tangible since I got married to her.  All she knows to do is to complain and present herself a nuisance before neighbours, family members and friends.

“Adenike loves to lord it over me at home and this I detest. I no longer love her. She’s a pain in the neck, “he said.

“I pray the court to award me custody of our children, I can’t bear that she goes away with them. If she does, she will turn them against me, “he told the court.

Giving his judgment after he had heard both parties, the court president, Chief Ademola Odunade stated that it was obvious that their marriage had broken down irretrievably.

Ruling, Odunade dissolved their wedlock and granted custody of their first three children to the defendant and the last two to the plaintiff.

The defendant was mandated to give the plaintiff N6, 000 monthly as feeding allowance for the two children awarded her.

He was also to give her N3, 000 to pack her belongings from his house and another N12, 000 to rent another apartment for a year.

You can get reinfected with COVID-19 if… —Expert