My husband gave me blows, removed my teeth ’cos he failed to perform in bed —Woman 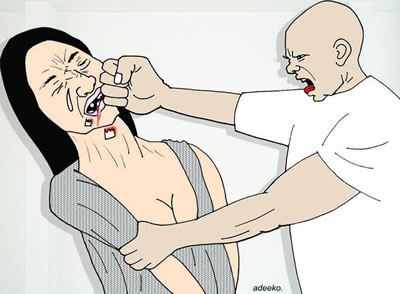 A MAN of Lusaka, has been dragged to the Matero Local Court in Zambia by his wife, who complained that his performance in bed was low.

According to Zambia Observer, Clara Kimbili, 32, in her testimony, told the Matero Local Court in Lusaka that Emison Njobvu, aged 47, inherited her from his late younger brother in 2008 and that  all was well until he became diabetic in 2012.

The two have three children including two left by her late husband.

According to Clara, the diabetes robbed Emison of his bedroom prowess much to his frustration.

She explained that despite visiting several hospitals to have Emison restored, his libido was still low.

Clara said her husband’s condition made him paranoid and was always accusing her of having extramarital affairs.

And for her punishment, Emison would unleash Floyd Mayweather-kind of hooks and uppercuts on Clara.

She presented her mouth of missing teeth to the court as the evidence of her unmatched boxing bouts with Emison.

Clara said at one point, Emison even went as far as posting her picture on social media accompanied by a threatening caption that he would insert a knife in her private parts to stop her from sleeping around.

The mother of three cried to the court to dissolve their marriage because Emison had also neglected the two children she had with his late brother despite selling the estate which included two plots and one house left behind by her late husband.

Clara said Emison and his family were now threatening to evict her from her house and wanted the court to rescue her.

Emison told the court that Clara became disrespectful after he couldn’t perform well in bed as a result of diabetes.

Emison said he became suspicious of his wife when he overheard one of her phone conversations with another man.

He denied accusations that he had misused his brother’s money.

“My brother left a plot of land which I later sold and used the proceeds from it to build a house.  It is not true that I have neglected the children. I have been supporting the children with school fees and other requirements,” he said.

Emison told the court that it was better for the court to dissolve their marriage because they have multiple problems.

In passing judgment, Magistrate Kaputo Ng’andwe granted the couple divorce on grounds that their marriage has broken down irretrievably.

The court ordered Emison to be providing monthly child support of K500 for the three children.

I worked as bus conductor to build our church, but my pastor-wife beat me, threw me out of the church —Pastor

My wife slaps me all the time, says she hates me —Husband