My husband claimed our child wasn’t his, threatened to throw his placenta to the dogs’ 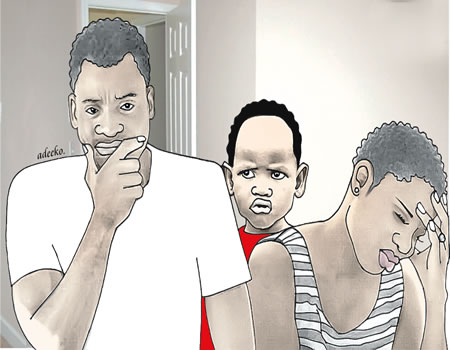 Alimot had sought for divorce on the accounts of neglect and deceit by her husband.

The plaintiff added that the defendant claimed he was not the father of their second child. Abdulkareem refused to appear in court after having been served court summonses twice.

Alimot giving her evidence said: “My lord, Abdulkareem is the most unreliable person I have ever met.

“Aside being a liar,  he is also deceitful and therefore cannot be trusted.

“My lord, my life is definitely not safe with such a person, “the plaintiff told the court.

“Abdulkareem denied responsibility of the pregnancy of our second child.

“He went behind me and told his family members that I was morally debased adding that the said pregnancy was not his.

“His family members came to our house in their numbers shouting on me and abusing me. They fought me and forcefully took our first child away from me.

“My lord, this happened in the presence of my husband who denied ever telling his family members such.

“He later ran away from home and switched off his phone. He left no clue as to his whereabouts.

“A few weeks later, Abdulkareem’s parents came to my house indicting me of the disappearance of their son and insisting that I must look for him.

“I reported at the police station that he was missing and waited for the police to carry out action based on my report.

“While waiting, our rent was due and we were asked to pack out of our apartment by the landlord. I moved to my parents’ house since my husband’s family was not ready to take me in.

“My lord, to my chagrin, my in laws arranged for my arrest by the police and I was locked up for days.

“The charge they brought against me was that I knew about the disappearance of their son and that I carted away all his property.

“A  few months later I  put to bed and I tried his number again. To my surprise his phone rang but he refused to pick my call.

“I then sent him a text message informing him of the delivery of our second child. He replied my message four days after.

“My lord, I called him and his parents to come for the child’s placenta but they all replied that they would give it to the dogs. I then decided to give my elder brother to bury.

“My lord, Abdulkareem later came apologising and claiming the child. He further went to throw a party to celebrate his birth. But he has since then refused to carry out his responsibilities towards  him.

“My lord, I have suffered enough in the hands of my husband, I pray that you separate us and make him take up the responsibility of their upkeep.

Ruling after he had heard the plaintiff and considering the fact that the defendant refused to come to court after being served two summonses, which according to him showed he was not interested in saving his marriage, , the court president, Chief Ademola Odunade dissolved their wedlock.

Odunade gave custody of their two children to the plaintiff and ordered the defendant to be responsible for their welfare.

The defendant was asked to give the plaintiff the sum of N10, 000 every month as their children’s feeding allowance.

He was also asked to be in charge of their education and health care.

Acopy of the judgment was asked to be served the defendant.

Re True Ethnic Origins of Nigeria’s Past Presidents and Heads of State: Was Muritala’s father a Urhobo?