‘My husband cares less about building a house, training our children in school, he feels happy only when he’s drunk’ 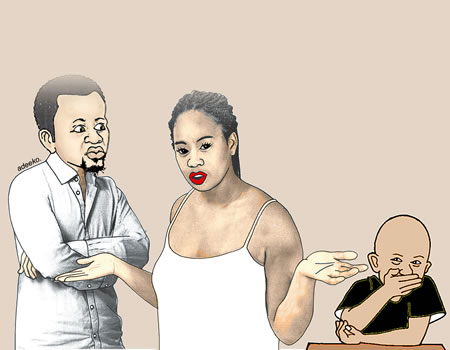 Kudirat who dragged her husband to court stated that he was troublesome and in the habit of beating her.

She added that he spends his income on alcohol and drinks himself to stupour always.

The plaintiff told the court her husband had frustrated her enough and thus pleaded with the court to separate them.

She also prayed the court to grant her custody of their two children because her husband has no time for them.

Kudirat further entreated the court to make him responsible for their upkeep.

Muhammed did not show up in court despite being served two summonses.

Kudirat in her evidence told the court that: “My lord, I have not met any man as irresponsible as my husband.

“He has made life unbearable for me because he carries no responsibility in the home. I labour day and night to make ends meet but my husband doesn’t appreciate this.

“All Muhammed knows to do is to fight me and beat me mercilessly when he’s drunk.

“My lord, while other men are putting together their resources to make the lot of their family members better, my husband wastes his on alcohol.

“Muhammed doesn’t care about our children’s welfare while their education has never been his priority. I’m the one feeding the home and paying our children’s school fees.

“My husband is not interested in building a house but feels comfortable renting apartments and being subjected to ridicule and harassment by landlords.

“The only thing my husband is interested in is drinking himself to stupor. When he’s in this state he starts behaving like a nuisance putting the whole compound in disarray and embarrassing me.

“I move about in the neighbourhood with my head bowed because of the shame Muhammed brings me.

“My lord, I’m tired of the humiliating life my husband has subjected me to. All I’m pleading for today is a clean cut from him. I want this court to separate us now.

“But my lord, Muhammed needs an awakening to his responsibilities. I, therefore pray the court to make him responsible for the upkeep of our children,” she concluded.

Giving his judgment, the court president, Chief Ademola Odunade, dissolved their marriage and granted custody of their two children to the plaintiff.

Muhammed was asked to give Kudirat N10, 000 every month for their children’s feeding and be in charge of their education and health care.

A copy of the judgment was asked to be served the defendant.

‘He borrows money from me and refuses to pay, made me pay our rent for the past 13 yrs’

Have you been spending quality time with your partner?