My dream is to preach the Gospel to millions of people before leaving earth, says Pere, BBNaija star

Entertainment
By Adam Mosadioluwa On Nov 24, 2022 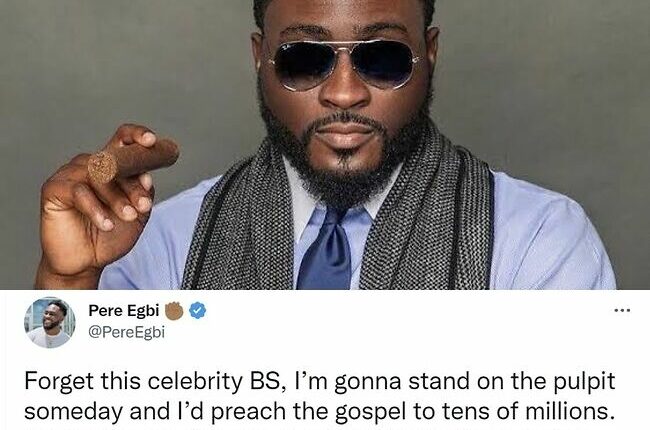 Big Brother Naija season 6 ‘Shine Ya Eye’ housemate, Pere Egbi, better known professionally simply as Pere, has revealed that his last desire before leaving the surface of the earth is to venture into the Ministry and preach the gospel to millions of people.

The reality disclosed this on Thursday on his Twitter handle.

According to him, his status as a celebrity and public figure won’t stop his desire to one day stand on the pulpit to preach the gospel.

He wrote, “Forget this celebrity BS, I’m gonna stand on the pulpit someday and I’d preach the gospel to tens of millions. It’s my dream. The one last thing I have to do before leaving earth.”

A Twitter user, @tgif1738 wrote, “And that’s why God made you a celebrity, use your platform to proclaim the glory of the Lord. This is awesome. God bless you with his grace and wisdom.”

Another user, @Funmilolah tweeted: “You already have a platform, start using it. People will actually listen because it’s you. Don’t wait till you mount the pulpit. The best time to start is today. A word today, another tomorrow, here and there, people will be encouraged and souls saved. I pray for the strength of God over you.”

@ChiefMaziObi tweeted, “After touring and flexing the world… It’s the ‘Last thing I’ll do’ part for me. If you feel it’s so important, why not do it now? But no, you’ll wait till you’ve done all the evil on earth before doing the preaching part. You talk like @DanielRegha.”

This is, however, not the first time a public figure will be making known their intentions to serve in the Lord’s vineyard. Earlier this month, popular Nollywood actor and film director, Yul Edochie, revealed that he had a calling to serve as one of God’s ministers.

More than 70,000 UK university staff go on strike over pay and pensions