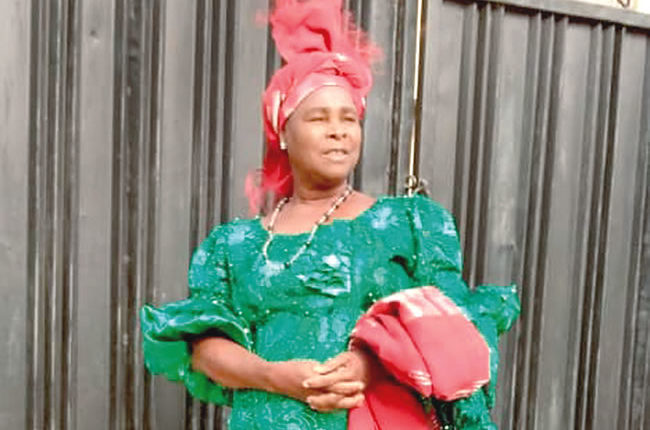 Mrs Oluranti Olunlade is a veteran Alaga Iduro and Ijoko who has been in the profession for 35 years. The retired secondary school teacher shares with OYEYEMI OKUNLADE how she started, what keeps her going and her advice for youths.

WHAT is your educational background?

I attended the United Nations College for my teacher’s training college in 1973 and started my teaching career in 1976 as a Grade 2 teacher at Union Practice B2, School 2 (Afternoon session), Ile Aperin, Ibadan. For further studies, I went to the Polytechnic Ibadan to study Accountancy. I retired from the teaching service in 2011, at Basorun High School, Basorun, Ibadan.

My first name is Kadijolo but I never dreamt of becoming either Alaga Iduro or Ijoko. I followed a friend of mine to Lagos for a family function and that was where her husband discovered the stuff I was made of. They were looking for someone to lead them to their in-law’s house so they engaged someone who told them that the assignment she was given was all about singing but she was not good at it. I told them there was no big deal and I started telling her how to go about it. Then she asked if I was an ‘engager’ and I told her  that I only found pleasure in it. That alone gave a principle that whenever I want to begin an engagement, I tell people that I am not ‘alaga iduro or ijoko’ it is Jesus. That was how it started.

That was around what year?

35 years ago. As a married woman, I was used to acting as ‘alaga iduro or ijoko’ being the responsibilities of olobirin ile; it was something every woman married into her husband’s family must learn how to do so as to be available when new wives are  come into the family. In the olden days, ‘alaga iduro or ijoko’ was not a business as it plays out in recent times.

Is it true that teachers dominate the profession?

No. Majority of ‘alagas’ are also nurses but the advantage teachers have over others is that talking is part of us. When some would say they find it difficult to face audience, no big deal in it for a teacher.

What are the challenges you faced at beginning?

Envy was number one problem I faced. It is normal that in a situation where you are people’s favourite or choice in anchoring some things, people would envy you because of money. However, when we started this profession, we did not make money, it was done free of charge. It was seen as part of entertainment then and whatever money being given was in appreciation of bringing a new wife’s engagement things into the venue of the programme. But immediately it was commercialised, envy set in.

How were you able to manage or overcome the envy?

As a mature person and a child of God, I went back to God on my knees to use the master key that I know, prayer, to conquer all challenges. It is my custom that anyone who I want to do engagement for, must be ready to fast and pray because a spiritual arrow had been shot against me before to the extent that I could not talk at an event I was supposed to coordinate.  Fortunately for me, those who shot the arrow eventually came to confess. The engagement was for a very important personality in the society.

What is the normal procedure for an engagement?

Engagement is in four stages: Writing in of letter from husband’s family, reply from wife-to-be’s family, introduction and engagement. But today, everything has been muddled up.

Did you have an  association in your days too?

No, it was majorly the responsibilities of wives in a family (Olobirin ile). Association  was formed when people started making money from it. Let us take a look at it from the Bible, Genesis 24 when Abraham wanted to marry  a wife for his son, he sent the head of his servants. He did not go by himself; that is Alaga. People now go for training and those who do not undergo training are not allowed to perform. So you have to register in present day Nigeria. However, I registered as a member of the association in order to avoid embarrassment. I pay my dues regularly, purchase uniforms and all other things that are required by me but I do not attend meetings.

You don’t believe in being paid for engagement, so what do you gain from anchoring it?

I do not ask people to pay me, it is free of charge till date. My God has not given me a go-ahead to charge people for what I do. The unique ability in me is a gift from God but my husband’s friend turned it  into business and he went ahead to produce a business card for me. He recognised the potential God deposited in me and persuaded my husband to allow me to do it  but I did not use the card till date. God has been the one announcing me. If I anchor an engagement in a family, people would request for my presence in others. When I  I am asked how much I want to collect, I tell them to allow the Holy Spirit to lead them. People usually tell me that I put them in a tight corner. I am only appreciated.

What are your concerns about today’s engagement compared to the days of old?

It was free of charge then but nowadays, people are paid even before the commencement of the event. Then we had “owo iwole, owo ikanlekun, etc. Clothes would be spread on the floor unlike these days when bowls would be placed down to collect money. It was solely on family’s request from the list given to you. Again, it was purely women’s job no pastor’s involvement. They also waste time a lot these days. Civilisation brought in the issue of money to traditional engagement to the extent that some youths want to run away from it because of the demand for money. Now, there is an entourage that must be paid. I did engagement within 30 minutes for a family, who because of traffic jam was behind schedule and Mrs Faith Oyedepo was in attendance. People believed that when engagement is done on the same day with wedding, the bride would automatically get late to church but that should not be the case. My normal programme does not exceed two hours. Another thing, I observed was that the singing aspect  would take  maximum time and such do not give  people the chance to hear the word of God which would be  done within few minutes. I  always ensured that I preach in the course of the programme to the couple. I  would tell people to evaluate the way I anchor my programmes by asking themselves lessons learnt as well as whether they have wasted their time.

Your unpalatable experience on the job in the last 35 years

Sometimes ago, I travelled with a politician’s family who are also members of my church from Ibadan to Saki, in Oke Ogun part of Oyo State to coordinate the engagement programme but I met a woman who was money conscious and wanted to take advantage of the occasion. Since that was against my principle so I did not eventually join them to coordinate the engagement. The person who went to assist me joined them but she was given only transport fare to Ibadan, nothing more. I get angry whenever I see young people quarreling over sharing  formular after an engagement ceremony.

What gives you joy most on this job?

I get to exercise my body. Dancing during an engagement is an exercise.  There was a time I had health challenges and people advised that I stop because they had no knowledge  of the health benefit I derive from it especially dancing. This job also creates an avenue for me to meet people. You cannot anchor an engagement without creating laughter which helps you live healthy as well; it keeps you going. Not only that, it is my own way of evangelising and I feel so happy about it.

What do you have to say about items in an engagement list?

I tell people that the things in an engagement list are traditional and optional.

My experience has revealed that some young people are afraid of going into marriage when they think of the money involved. Therefore, traditional wedding should be anchored by children of God. In addition, youths should stop turning things upside down by doing engagement during reception. The ideal thing is that parents from both sides must have consented to a union, which is called “elders’ blessings” before their children go altar for blessings. They should not use civilisation or ‘quickly-quickly’ way of life disrupt ideal marriage process or order. God will help them.

What are the best relationship pieces of advice you ever got?

I sat for UTME, GCE with my children’s age mates —Princess Okimein, Ekiti…

COVID -19: We want to equip women on new ways of doing business —Okuribido