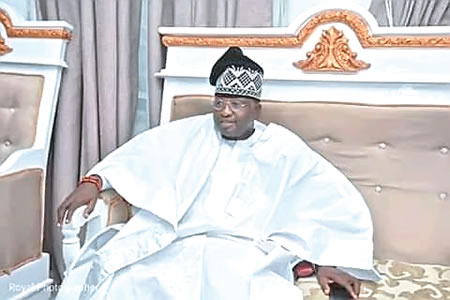 The atmosphere in Otun Ekiti, in Moba Local Government Area of Ekiti State,  these days, is electrifying. Indigenes and residents of the town are upbeat. The announcement of Oba Adekunle Adeayo Adeagbo, an economist , from the Ile Iyaba Ruling House, as the new oba-elect of the community, has finally put to rest the palpable tension  the long months of waiting had generated  in the town.

On May 5, 2020,  Oba Adeagbo,  was selected by the kingmakers among the six contenders that vied for  the royal stool. The kingmakers were acting on the directive, given to them, by the  Ekiti State Government,  to select a new traditional ruler that would fill the vacant stool of Oore of Otun Ekiti.

Besides his track record and level of exposure, which made his candidacy readily acceptable to the people of the community, not a few would readily attribute the selection of Adeagbo as the community’s way of appreciating a family that had given it its all.

Adeagbo’s first task on being selected, was to congratulate other candidates for a well-contested contest, and seek their support in the task of enhancing the lots of the people of Otun Ekiti. He stated that his emergence as the new ruler of the community does not necessarily indicate his superiority over other candidates, but should be seen as a call to service.

He also expressed gratitude to the state governor,  Dr. Kayode Fayemi and the executive chairman of Moba Local Government Area, Bayo Aborisade for not politicising the stool.

To demonstrate his seriousness of turning the fortunes of the community around, he immediately unfolded his economic blueprint, where he highlighted human capital development as one of the priorities of his administration.

“Human capital development in education and work force will be our priority as it plays a critical role in community development. It will assist the low-income individuals. We intend to push heavily in this area by ensuring all Otun sons and daughters, in need of education from early childhood through post-secondary and workforce development, get proper education and skills for personal development that will be competitive in this technological age.

Another area of development the new monarch intends to focus on is the enhancement of the people’s cultural heritage.

Interestingly, history has it that this serene community, that shares a boundary with Omu Aran in Kwara State, is replete with history, with one of them being the intertwining of the Oore Otun stool with that of the Ooni of Ife.

Adeagbo is not oblivious of this rich culture, and he is determined to enrich it.

For instance, while corroborating the community’s rich cultural heritage, he took time to explain the significance of the  community’s royal stool to  the entire Yorubaland.

“Oore Otun is one of the topmost and foremost traditional stools in Yorubaland. In 1903, when the then Ooni of Ife prepared the list of Yoruba obas which was published,  then, it had the Ooni as number one, the  Olowu of Owu Abeokuta as number two, Alaafin of Oyo as number three, Oba of Benin as number four, with Oore of Otun as number five on the list. These facts are not new. They have been there for a very long time. Oore was formally in Ile Ife, and was very close to Oduduwa during his reign,” he stated.

Adeagbo stated that one of his priorities would  be to ensure the leading role of Otun in Yoruba land, since the days of its forefathers, is upheld and given prominence. He assured the community of his intention to re-structure the Oore throne in such a way that all past information about its heritage and history are documented and archived. “This will assist our children and generation yet unborn to appreciate their true identity as noble sons and daughters of Yorubaland,” he added.

He also intends to work on infrastructural development of the community, so as to enhance the lives of people living in the community.

“I believe if we look into this, it will push Moba forward, and stimulate its economy.  It will also improve quality of life of the people and attracts investments to the community,” he assured.

“Our annual Otun day program will take a new dimension. It will be tied to developments of infrastructure, with the details being worked out by the organiser of the program,” he added.

As the town awaits the installation of the new oba-elect, and the eventual handing over of the staff of office, many indigenes are hopeful that the new traditional ruler would walk the talk.

I want to change the narrative of the Ijaw nation —Idoniboyeobu