THE League of Imams and Alfas in Ogun State has condemned the recent attack on St. Francis Catholic Church, Owo, Ondo State, where many worshippers were killed.

The league expressed disapproval during a condolence visit to the Ogun State office of the Christian Association of Nigeria (CAN) in Abeokuta, where it also expressed commitment to the peaceful coexistence of all residents of the state in spite of religious differences.

The leader of the delegation, the league’s Secretary-General, Sheikh Tajudeen Adewunmi, presented a condolence letter to the chairman of CAN in the state, Bishop Tunde Akin-Akinsanya, during the visit.

Sheikh Adewunmi described the Owo attack as unfortunate and expressed the hope that such incident would not happen again in the South-West. 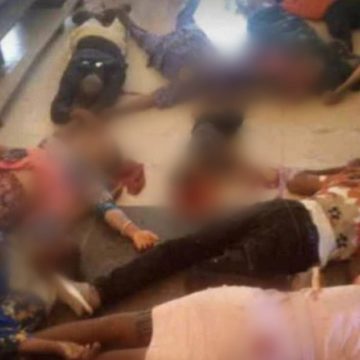 He said: “We are here to show our displeasure to the killings and to also assure you that Muslims are not killers and will not attack Christians.

“We see ourselves as a family and we will continue to relate as such. We have Christians and Muslims in our families. We have no reason to attack one another.

“We, the Muslims, have come to register our condolences. And we are here to assure you that Muslims in Ogun State are very peaceful, we  are very friendly with Christians. We pray that such a thing will never happen again.”

In a remark, Bishop Akin-Akinsanya described the Owo attack as an act of enmity which should not be ascribed to any religious group.

The Ogun State CAN chairman noted that the level of mutual understanding existing between Christians and Muslims in the South-West made it surprising that such an attack happened in the region.

He said: “Such things that are happening in the North cannot happen here because we are a family. You hardly see any family without the two religions, but it is unfortunate that such a thing happened. The attack came from our arch enemies.

“This is the first time this kind of thing would happen and I want to commend the leadership of the Islamic religion in Ogun State for this. I pray Almighty God to bless all of us.

“These attackers are neither Muslims nor Christians. They cannot find a place where people are asked to kill others in the Qur’an or Bible. It means they are satanic.”

Adewunmi was accompanied to the CAN office in Abeokuta by the Imam of Makun, Sagamu, Dr Tajudeen Ashaye and other Muslim leaders from across the state.

In spite of the huge investment in the water sector by the government and international organisations, water scarcity has grown to become a perennial nightmare for residents of Abeokuta, the Ogun State capital. This report x-rays the lives and experiences of residents in getting clean, potable and affordable water amidst the surge of COVID-19 cases in the state…Muslim clerics visit CAN  Muslim clerics visit CAN

Zakat and Sadaqat Foundation distributes N39m to widows, others in Lagos