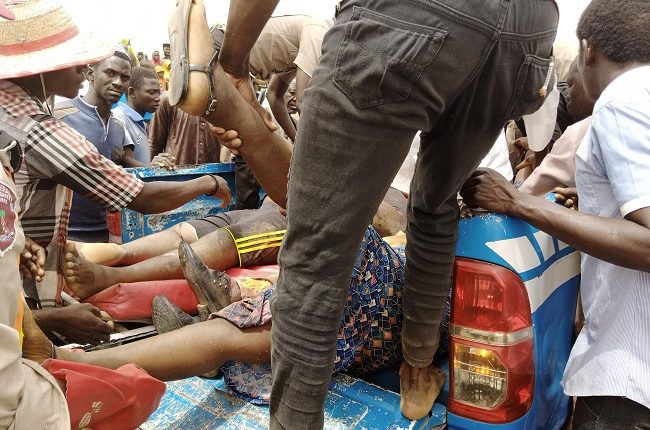 Multiple ghastly motor accidents at two locations in Bauchi State have claimed no fewer than 10 lives including a nursing mother and others who were heading to a local market in Dukku LGA of Gombe State.

The first accident involved a Toyota Hummer bus belonging to the National Tourism Development Commission (NTDC) which had a head-on collision with a Sharon commercial bus conveying passengers to Gombe while the second accident was a lone one involving a truck conveying people to the market.

Our Correspondent who is a Special Marshall participated in the rescue and evacuation operation alongside personnel of the Federal Roads Safety Corps (FRSC), men of the Rapid Response Squad (RRS) and villagers who trooped to the scene.

Information gathered at the scene of the accident have it that the NTDC staff were heading back to Abuja having spent a few days at the Yankari Games Reserves and Safari on an official assignment.

It was gathered that in the process of overtaking a heavy-duty truck, the Hummer bus had a head-on collision with the oncoming Sharon commercial bus which few minutes before loaded passengers in Bauchi heading to Gombe.

Though the State Sector Command of the FRSC confirmed the accident, it could not give details of the casualties as of the time of filing this report.

The traders were reportedly in a trailer from Darazo town, Darazo local government area of Bauchi state, on their way to Dukku market in Gombe state, Wednesday morning, when the incident occurred.

He said that the FRSC had a tough time carrying out a rescue operation saying that the exact number of casualty is yet unknown as of the time of filing this report.

Yusuf Abdullahi said: “Yes, there was an accident this morning involving over 70 people who were is a truck going to Dukku market. The truck skidded off the road and threw the people away. They were hung on the truck. It took us (FRSC) hours to carry out the rescue operation and presently, the victims are being sorted out”.

He added that “I cannot tell you the exact number of the casualties but some of the people have died. As soon as we are done sorting out, I will give you the full details of the incident.”

WHO commends Obiano over fight against COVID-19 pandemic in Anambra