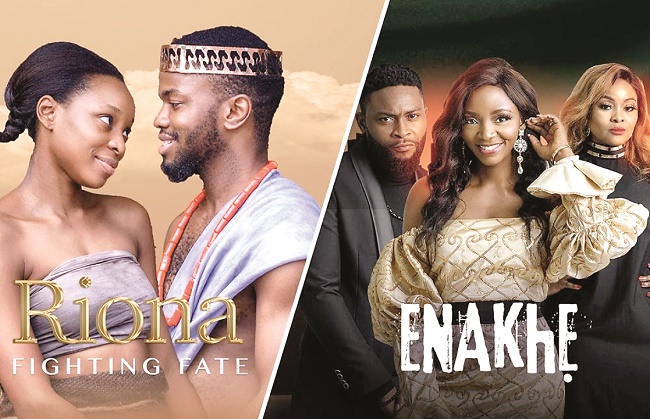 MuLTICHOICE Nigeria, avideo entertainment provider has been consistent over the years with the production of hit series and shows, some of which include ‘Battleground’, ‘Hush’, ‘Ajoche’, ‘Brethren’ and ‘Unbroken’.

Like these other shows, the new telenovelas, ‘Riona’ and ‘Enakh’e air on Africa Magic.

‘Riona’, tells the story of a wicked king and a village under siege. Rebellion looms as the king, Otokun, does all he can to stop a dark prophecy from being fulfilled. Destiny is against him as Tsema and Aghan, two children born under the dark moon, walk a complicated path on their way to fulfill the prophecy foretold.

On the other hand, ‘Enakhe’, set in modern day Benin city, tells the story of a rebellious daughter who after the sudden death of her father is forced by circumstances to grow in every way possible to become the leader of her extended family and the family’s criminal empire while contending with antagonists both physical and otherwise.

The series was shot in Edo with a cast and crew made up mostly of indigenes of the state. ‘Enakhe’ features a stellar cast which includes notable names like Alex Usifo, Ivie Okujaye, Lancelot Oduwa Imaseun and Lota Chukwu among others.

Speaking at the recently held MultiChoice media showcase, Channel Director, Africa Magic, Wangi Mba-Uzoukwu, said “Right on the back of Big Brother Naija, we’re very excited to be introducing ‘Riona’ and ‘Enakhe’, two series we’re very confident our viewers would love, so confident that we are dedicating one whole hour on primetime TV to them. We went hyperlocal with these just like ‘Ajoche’ and all the other fan favourites from past years. Africa Magic is very committed to telling the African story and we can’t wait to show you what we have been cooking.

‘The new telenovelas are a demonstration of MultiChoice Nigeria and Africa Magic’s commitment to investing in the Nigerian creative industry and local talents while telling stories that will resonate with customers’.

Journalism prepared me for entrepreneurship, fashion and music — Annjay