Islamic News
By By Saheed Salawu with Agency Report On Mar 2, 2018 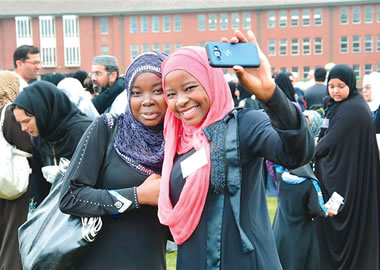 MUSLIM women in the country have said that they play more important roles in the family and society than to be seen as sex objects.

They expressed displeasure at the numerous challenges that the society has subjected them to, noting that they are reformers.

According to a statement signed the Public Relations Officer, MSSN Lagos, Ade S. O., some of the women spoke at the 2018 Sisters’ Enlightenment Programme (SEP), organised by the Sisters’ Circle of the Muslim Students’ Society of Nigeria (MSSN), Lagos State Area Unit at the Lagos State Polytechnic, Isolo.

The SEP, which had about 2,000 participants, saw experts discuss the roles of women in the society.

The head of the females (Amirah), Baseerah Majekodunmi, explained that there was the need for awareness about key issues facing women in recent times.

She said, “The 21st century woman has been subjected to a whole lot of ridicule in the society and it has gone a long way to affect her social standing. She is seen as a sex object, good for marketing products and to satisfy lustful desires of men.

“Women are placed on a high pedestal where they seem to be valued for their bodies and not their brain. Although learning to love oneself could be a difficult and long road, we need to stop looking at other people and look at ourselves.

“There is no gainsaying that the Muslim woman has a critical role to play in reforming the society. ‘In Her World’ is a carefully chosen theme for this year’s SEP which is solely aimed at bringing to limelight, the struggles and realities facing the Muslim woman in her spiritual life, career, health, education as well as other aspects of her life.”

A former women leader of Nasrullahi-l-Fathi Society of Nigeria (NASFAT), Nafisat Arogundade, implored the women to be good ambassadors and to strive to be righteous.

“Don’t be discouraged by the challenges posed against us by the society, we have a greater role to play,” she added.

While speaking on the theme, “In Her World,” the proprietor of Pace Setters Academy, Ibadan, Toyyibah Abdul Salam, called the attention of the women to the importance of proper child upbringing in the society.

She said, “A woman should be in the company of the righteous people and friends. She uses the best method for children upbringing. She treats her husband well and treats his parents like she would treat her parents.

“Being a woman is an all-encompassing role. It demands that we uphold the correct tenets of Islam by our actions and inactions. We need to train ourselves to be unique individuals who do not conform to the absurd societal standards prevalent in our society.

On her part, the director of Succour Psychological Health and Services, Ibadan, Lazbah Aroyewun, while speaking on the sub-theme, “The Self Concept,” warned women against low self-esteem.

Aroyewun said, “The ideal self is the self that you aspire to be. It is the one that you hope will possess characteristics similar to that of a mentor or some other worldly figure. Prioritising the western culture affects our way of thinking and behaviour.

“Be confident. High self-esteem equals to high self-worth. It is the approval and value that you place upon yourself.”

Head covering and freedom of religion