Movie review: Did Coming to America make a comeback for a merry crowd?

Entertainment
By Favour Boluwade On Mar 20, 2021 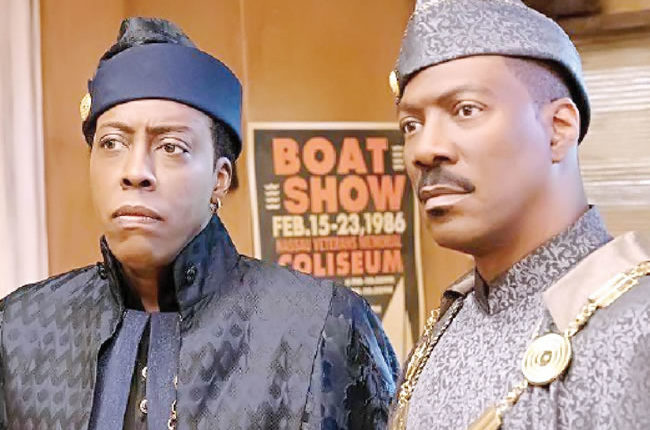 Zamunda didn’t remain the same and 30 years is a long time for the level of civilisation, postmodernism and pop culture not to be reflected in a movie set as a 21st-century royal story.

Coming to America II was highly anticipated by the most of the world. Coming to America in summary was about prince Akeem who was to be forced into marriage to someone he hadn’t met before, but who stood his ground and went to America to find himself a bride.

He sees himself later on in the new part of the movie as a king who fought and stood for love with the same thing reoccurring 30 years after.

The new part in summary shows how prince Akeem went on to take charge of Zamunda as his father passes on,  the need for an heir and his search for one.

But one might wonder, 30 years ago there was no son and to maintain the same carefree, manipulative character of Sami they had to bring a son for Akeem; a son who the barbers in the popular barbershop in Queen’s knew immediately from a sketch.

It seemed as if there were too many things the producers wanted to infuse in his script in such a short period.

How Coming to America (2) noted obvious infrastructural changes in Zamunda; the supposedly backwards society as at time but not Queen’s,  where innovation sprung from raised brows from the onset of the movie.

The barbers were in the same shop, same place and with little or no change in lifestyle, behaviour and discussion. Were they waiting for Prince Akeem to come back to Queens for 30 years?

Though the thought of actions and what later developed as the central idea of the movie is the deliberate fantastic digital African philosophy that attempts to see beyond male dominance and giving voice to the female vigour. All around the world, women have been noted to be fighting for equality and it was only fair that the movie found all means to make that loudly explored.

King Akeem’s first daughter (Meeka) speaks volume of this postmodernism gender liberty even in the African patriarchal society. It speaks on the modernisation that has allowed women go for what they want, be who they are and be fearless about it. Though one would think after the movie, why was a son no one was aware of be brought to prove a point when the writer could have maintained the princely test happening between Meeka and Idi Izi (General Izi’s son)  and not necessarily make her compete for a crown with her new brother (Lavelle).

It is also bedazzling that Queen Lisa was just okay with her husband, King Akers bringing in a foreign woman and a son and they just bonded as a family.  One might excuse the fact that it was supposed to be comedic hence no ‘bad feelings’.  It became commendable later that she had to choose her daughter over and made Akeem aware that there was nothing her son could do that the daughter could not do. It could be the subtle tone that women would at first stay so low but with the subject of gender equality, they would be seen again; no matter how long.

Still, on African-ness,  the popularity of Afro-beats made it to the movie. Who would have thought, now Grammy Award-winning Damini ‘Burna boy’ Ogulu and Davido would be featured on the musical aspect of the movie. It has only shown the sensitivity of the scripting to the changing culture of music and lifestyle which cannot exclude Afrobeat at all.

For the costume, it was a very intense display of Africa in print, colours and props. If anyone had thought Africa wasn’t royal enough, every clothing used only made that line of thought irresponsible. The royal theme was explicitly described without saying too much; how the Queen (Lisa Joffa) moved on from being just the lady from Queen’s to being royalty in Zamunda was well played just by the costumes.

The transition of King Jaffe Joffer to the afterlife was hilariously described; though death hurts, it was made a subtle undertone that life keeps revolving and one would not enjoy the pleasures on earth forever hence one has to make the best use of it. Maybe that’s why the King – Akeem’s father died during his burial to enjoy the lasting moment.

But it would also be a foreshadowing to the afterlife of humans in general. Majority of the cast from Coming to America 1 were present in Coming to America 2 after 30 years with only the former Queen Joffer missing. It was quite an achievement and one emotionally charged atmosphere even while watching to see that people who were there before could still be around to make a sequel; older looking but bringing a feeling of nostalgia.

In all, the movie might not have made a serious plot because of the essence of comedy and romance and how it had several exaggerated reactions to certain happenings. Because if it were a serious plot, there might not have been the necessary role of Prince Lavelle who later became an ambassador to Zamunda and Meeka still became the heir to the throne after all the time, energy, money and pressure to find King Akeem a son.

He squandered his income on strange women, attempted to lace me with magun —Wife

He accused me of using his ‘star,’ threw out my belongings —Wife