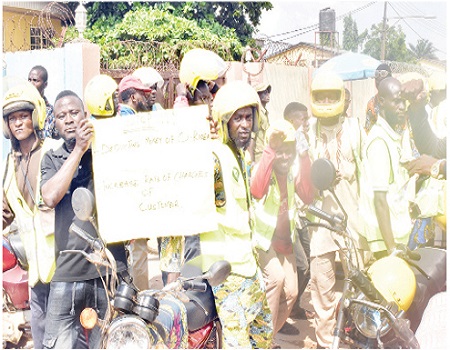 ORIDE motorcyclists on Monday lamented alleged ill-treatment being meted out to them by their employer, OPay.
As a result, the riders gathered at the company’s office in Bodija, Ibadan to stage a protest.

One of the riders who spoke to the Nigerian Tribune during the protest said they were expressing their displeasure because the company was not fulfilling the agreement it had with them.

He said: “When we started, OPay told us we would be insured, but now, we have realised there is no compensation given to the family of a late rider. This was not what they told us when we started. OPay is more concerned about the passenger than the riders doing the job. We, the riders, matter too.

“Secondly, the money they give us for each trip is low compared to the work we do. A rider can receive an order worth over N400, but OPay would give us less than N50 sometimes. We can’t cancel orders anymore even when we are far away from the passenger to avoid the cancellation fee payment.

“This peaceful protest is for OPay to work on their app and have a fixed price. We were promised better living conditions than those in the garages when we started; we want them to fulfil their promise. They should stop deducting our money unnecessarily,” he said.

Efforts to speak to the management of the company were unsuccessful as of the time filing this report.