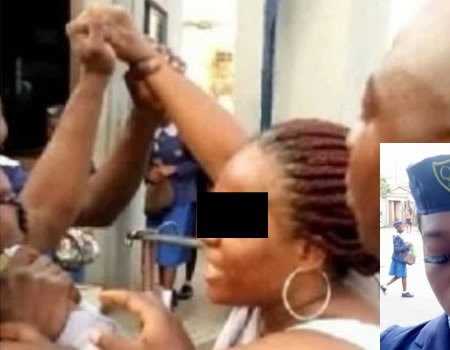 It is believed the style of dressing is deemed “indecent” by the school authorities.

The development made the student’s mother protest her daughter’s removal.

The mother appeared in the video to have stormed the school premises and allegedly manhandled one of the security operatives in protest.

Different persons in the video were also recording still and motion images of the mother and child.

One of the persons in the video said: “E wo nkan to le s’oju. E wo paint to to s’owo wa school. (Look at she fixed on her eyes. Look at the polish on her nails.

“A ti snap ee (we have snapped her), we are going to video her… Snap her very well. Video her.

“A ni nkan to le s’oju wa si school niyen. O de to paint wa si school (this is what she fixed on her face to school and she polished her nails to school),” the woman said.

When another person in the video asked if the woman with her is her mother, she said: “Yes. That’s her mother.

“That is the end. Don’t come back to Queens College. That’s the end,” the woman in the video barked at the mother and child as they leave the vicinity.

The mother in the video said: “Let me take her home…”