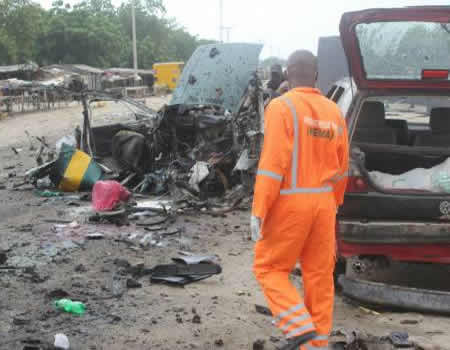 The Borno Police Command on Sunday confirmed the death of four persons after an attempt by some suspected suicide bombers to infiltrate Maiduguri in Borno.

Mr Victor Isuku, the spokesman of the command said in a statement in Maiduguri that three bombers had attempted to infiltrate Maiduguri at about 9.00 p.m. on Saturday.

“At about 2100hrs of Saturday, three suicide bombers, a male and two female, attempted to infiltrate Maiduguri town through Umarari village in Molai general area.

He the bombers detonated the improvised explosive device strapped to their bodies while running in different directions and four persons died in the process.

“Four people, including a civilian JTF, a woman and her two children died while eight others sustained injuries’’, Isuku said.

The Boko Haram insurgency has killed more than 15,000 people since 2009 and forced some two million to flee their homes.

Although the Nigerian army, backed up by neighbours, has retaken most areas held by the group, the jihadists still operate in the area of Rann, slipping over the porous Cameroon border after attacks.(NAN)

Massive collection of Beatles records goes on auction in Paris