AKINWALE ABOLUWADE reports the experiences of people living with diabetes at the World Diabetes Day 2019 in Osun State. 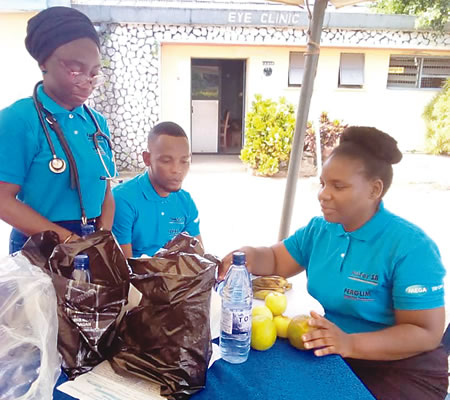 In 2006, when he clocked 58, Mr Dokun Ajiboye, an Osogbo-based architect, was vibrant and kicking until he came down with ill-health in the course of the year. In 2019, while recounting his plight, the septuagenarian said that he was shocked to know that he was diabetic. The native of Oba Ile in Olorunda Local Government Area of Osun State said it took him a long time to recover from the shocking news of his health status.

Mr Ajiboye, while reliving his experience at the sideline of the 2019 World Diabetes Day at the Ladoke Akintola University Teaching Hospital, (LAUTECHTH) Osogbo, recently, said: “I got to know that I am diabetic in the year 2006 when I took ill. I was advised to take further checkup. I noticed some complications, like vision impairment and excessive urination – I can urinate up to five times at night. I noticed some other complications like erectile dysfunction.

“I was placed on medication and I was advised on the food that I can take and those that I cannot take. I have been trying my best to avoid oily and starchy foods. When I noticed lately that my drugs were no longer efficacious, I lodged a complaint. I just learnt that as a diabetes patient, I have to avoid eating fries and seasoning. Now, I shall avoid eating junks.”

Lamenting the cost of poor level of awareness about diabetes, he said that healthy lifestyle and timely diagnosis were effective precautions against the prevalence of the disease. “I have benefited immensely from being here today. I have made up my mind to get in touch with my children to ask them to take it upon themselves to watch what they eat. I am going to tell my children to take my grandchildren for diabetes screening. They should not wait for as long as I waited before they do the test. Since I am diabetic, any of them has the tendency to have it,” he said.

However, the old man is now worried that he has been living a sedentary lifestyle saying that he works on his desk in the studio all day long. He said: “I have to exercise my body in order to keep active, fit and healthy.”

Mr Ajiboye, who said that his wife is obese, promised that he would advise her to take diabetes test. He said: “But as a nurse, she is aware of the need to have regular checkup. My advice for every family is that they should undergo diabetes screening to confirm whether they have the disease or not. They should not wait until when they get to the precipice of the disease before they take the test because that would be dangerous and too costly for them.”

Mrs Ibironke Agboola, a petty trader who is warming up eagerly for her 65th birthday by March 2020, manages her own condition using multi-dimensional approach. A petty trader who sells from home, Mrs Agboola is obese and finds it difficult to exercise due to arthritis. Barring other factors, experts linked her case to sedentary lifestyle. Having been selling from her home, they said that she does not do sufficient physical activities like brisk walk as her shelter doubles as her work place.

Like Mr Ajiboye, she knew about her medical condition when she went for a checkup following a debilitating illness in 2006. She said: “I was told of my case after having medical checkup at Catholic Hospital, Asubiaro, Osogbo. I was not too worried about the news but I ensured that I take my medication regularly and I adhere strictly to instructions. I take food as advised by medical practitioners.

“I am a trader; I sell provisions from home. I am an arthritis patient, so I just try to do light exercise. I ensure that I drink a lot of water and I always find out what I can do to help myself by asking questions from those who know. For instance, I take Aloe Vera and local herbs occasionally. We were told to abstain from fatty and starchy foods.

“I check my blood sugar level regularly. Two weeks ago, I checked and it was 170. Today (November 14), it came up to 187. That was the effect of the soft drink that I took one day ago. My advice to members of the public is that they should desist from habits that are inimical to their health. Health is wealth, so, we should make out time to do checkup and we should spend money on our health.”

In the view of Mr Yemi Adegoke, so many people suffer various health complications due to lack of awareness. Using his personal experience as an example, the 63-year-old man said I loved eating carbohydrate foods and I used to eat it a lot because it sustained me for a longer period. Adegoke, who is a retired civil servant, also likes to take soft drink until the year 2018 when he discovered that he was diabetic.

He said: “At a point, I started to feel pains all over my body. When I was taken through some tests, I was told that there was excessive sugar in my blood. The doctor explained that this means that I am diabetic. At that time, I was having an acute headache. My head was always feeling so heavy and my ankles were always paining me.

“I was given drugs and I was advised to take them religiously as prescribed. Since then I had cut down on carbohydrate intake and I exercise moderately at home. Against my initial belief that diabetes is a disease that comes suddenly, I have learnt that the disease comes gradually and subtly and it is a killer disease.

“We were advised to take fruits and lot of water and we were advised not take alcohol and soft drinks any longer. My wife has taken a test and she is free. I want to advise our people that they should desist from taking sugary things.They should take carbohydrate in small quantity and they should engage in active lifestyle.”

Alhaji Suleiman Ibrahim, a security consultant with the Ladoke Akintola University of Technology Teaching Hospital, Osogbo, got to know that he was diabetic about a year ago. He said: “As a contract staff of the teaching hospital, we are required to do medical checkup yearly. If not found capable, one would not be engaged to work with the hospital. It was during the exercise that I got to know that I am diabetic. Before the test, the only symptom that I noticed was persistent urination.

“I am not an alcoholic but I love eating pounded yam.” He expressed joy that his working environment has helped him to ascertain his medical condition, adding that, “it is very important to go for checkup so that one would not be caught unawares.”

Meanwhile, experts have warned that the effects of the menace of diabetes may be adverse on the family and the human society if not effectively tackled.

A consultant endocrinologist, LAUTECH Teaching Hospital, Dr Olukemi Yusuf, described diabetes as a global epidemic and threat. Globally, we have more than 425 million people living with diabetes. We are doing advocacy so that more people can be aware of the increase in the trend of the disease and the need for us to do something to reduce the burden of the disease in our society.

“The theme of this year’s World Diabetes Day is ‘Family and Diabetes.’ Diabetes used to be the problem of the developed nation but it is now common even in underdeveloped countries.” Saying that lifestyle is largely responsible for the prevalence of diabetes in the world, she stressed that, “We have four major types of diabetes, but the commonest is the type-two diabetes. If you have 100 diabetes cases, more than 90 would be type-two diabetes. The risk factor for the development of type-two diabetes is family history, obesity and sedentary lifestyle – When people are not physically active there is the tendency to gain weight and to develop diabetes especially in those that have genetic disposition to the disease.

“This year’s anniversary focused family support or the role of the family in the management of diabetes. Family members of those living with the disease should rally round them because the challenges that these people face are enormous. The amount of money that they spend on glucometer and the medication they are taking are expensive.

“Those that are at risk of diabetes may not know that they are close to it or that they already have it until complications set in. At this stage, they begin to see symptoms like excessive urination, weight loss and so on. By this time other complications may have set in.

“We want people to know their status. Majority may be in the pre-diabetes and they would not know. For those who are in the early stage of the disease, it may not manifest until some other complications set in and they get to the emergency room. So, we want them to come for screening.”

She stated that eating poor diet and reduced physical activities can induce diabetes in children as well as in adults. “Obesity is associated with type-two diabetes because in the presence of excess fat, insulin sensitivity is reduced. Children, nowadays, are overweight and obese because they indulge in junks and fast-food that make them gain weight,” Dr Yusuf said.