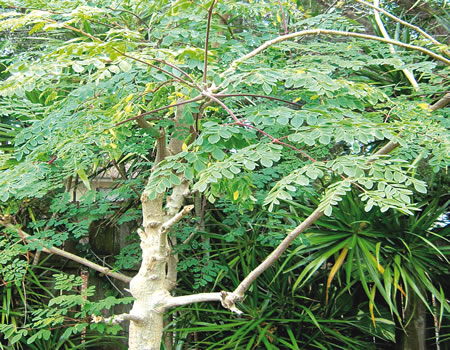 Every one feels low at one time or the other. When it happens, many reach out for a cup of coffee or can of energy drink. But a good alternative could be a warm or ice-chilled tea made from the leaf of maize and moringa.

In a study, researchers suggest that leaf extract of maize has antidepressant activity and this lends credence to its use in ethnomedicine for the treatment of depression.

The leaf extract was found to cause significant non-dose-dependent increases in the frequency of line crossing, walling and rearing activities of the pretreated mice.

It also reduced significantly the immobility time of the mice in force swimming and tail suspension tests. The effect of the highest dose of the extract (510 mg/kg) was comparable to that of the standard drug, imipramine (an antidepressant).

Monitoring of locomotor activity of animals has been used in assessing the effectiveness of the drug on the central nervous system (CNS). Increased movement is a measure of the level of excitability of the CNS and its decrease may be intimately related to sedation resulting from depression of the CNS.

Central nervous system stimulants are known to increase locomotor activity, while agents with depressant activity cause a reduction in movements.

The CNS stimulatory effect of the leaf extract was further supported by its potential to reduce the immobility time of mice during force swimming and tail suspension tests.

Forced swimming and tail suspension tests are two of the most commonly used animal models of depression for antidepressant screening.

In addition to other uses of the plant, maize grains, leaves, cornsilks, stalk, and the inflorescence are employed in ethnomedicine for the treatment of several ailments.

For example, corn silk is used as an antidiabetic or diuretic, and its decoction is taken for the treatment of urinary troubles and gallstones.

Warm tea made from the husk and leaf is taken for the treatment of malaria, depression and other diseases in Ibibio traditional medicine. Previously, some studies suggested that the leaf extract had anticancer, anti-inflammatory and analgesic, antimalarial and antiplasmodial properties.

Previously, researchers said moringa leaf tea could be useful in treating neurologic disorders and play a key role in memory, mental alertness, mood elevation, response to a stimulus such as stress and pleasure which are common in depression.

Researchers in this 2018 study published in the African Journal of Pharmacology and Therapeutics had said that Moringa oleifera tea may be an adjunct in the treatment of depression.

They had evaluated the antidepressant activities of ethyl-acetate and aqueous fractions of Moringa oleifera leaf extract in mice and suggested its tea in the management of depression in the nearest future.

Moringa oleifera is commonly known as drumstick tree (English) and in Nigeria is popularly known as “Zogale ganji” in Hausa, “Adagba malero” in Yoruba, and “Odudu oyibo” in Igbo.

It has been reported to be used traditionally for the treatment of convulsion and neurologic conditions. The leaves are used in folk remedies for tumours and as a dietary supplement.

Moreover, a tea made from guinea grass can also be helpful to boost memory, increase mental alertness, elevate mood and respond better to stimuli such as stress and pleasure, which is common in depression.

Researchers investigated the antidepressant activity of guinea grass in Swiss albino mice in 2018 edition of the African Journal of Pharmacology and Therapeutics.

The extract was found to significantly increase the frequency of line crossing, rearing and walling activities of mice in open field test. It also decreased significantly duration of immobility time of mice in force swimming and tail suspension tests.

The Ibibios of Akwa Ibom State, Nigeria, use guinea grass in the treatment of various ailments such as malaria, microbial infections, rheumatism pain, inflammation, diabetes and central nervous system disorders.