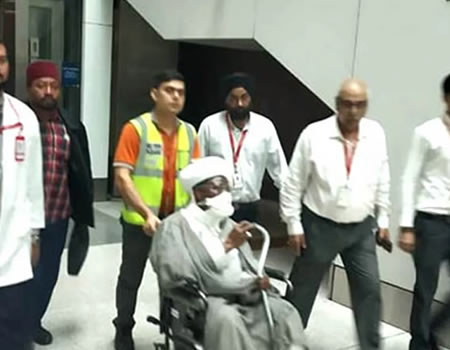 The last may not have been heard about the controversies trailing the botched medical trip of the detained leader of the Islamic Moment in Nigeria (IMN), Sheikh Ibrahim El-Zakzaky to India as the Federal Government is set to prefer fresh charges against him.

A highly placed security source who disclosed this to the Tribune Online in Abuja on Sunday said that the Federal Government was very embarrassed by the strange acts exhibited by the Shi’ites leader while in India which led to his hurried repatriation back home.

The source further explained that the sect leader went to the height of seeking political asylum in India and other outrageous demands contrary the conditions spelt out in the permission granted him by the Court and those of the group of negotiators who facilitated foreign trip with the Federal Government.

According to the source, “there is doubt about that, the sect leader will face appropriate charges by the court of competent jurisdiction for trying to bring the Federal Government of Nigeria to disrepute before the international community while in India.

“All I can say for now is that he has some explanations to offer the court for his actions while in India and the relevant government agencies are already working on this.

“This is not a Banana Republic where anything goes, we are a sovereign state being governed by the rule of law, we have to bring him back home when it dawned on the government that the sect leader was not sick but set for a game.”

The Federal Government had on Friday claimed the sect leader was moved back home when he tried seeking asylum in India.

In a statement by the Permanent Secretary of the Federal Ministry of Information and Culture, Mrs Grade Isugekpe on Friday, the Federal Government accused him of attempting to capitalise on his presence in India to gain international sympathy

The sect leader and his wife are currently being prosecuted by the Kaduna State government for culpable homicide before he was permitted to travel to India for medical treatment.

He was whisked away along with his wife on Friday by the operatives of the Department of State Services, DSS on arrival from the botched India trip.