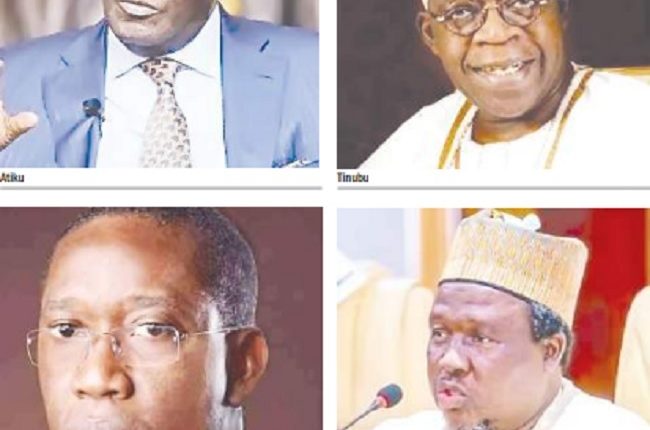 MORE presidential and vice-presidential candidates have been found to have informed the Independent National Electoral Commission (INEC) that they have lost their academic certificates.

Documents displayed by INEC and sighted by Saturday Tribune showed that apart from the presidential candidate of the All Progressives Congress (APC), Senator Bola Tinubu and his running mate, Kabiru Masari, whose respective non-disclosure of primary and secondary schools attended and claim of loss of certificates have continued to generate interests across the country, the vice-presidential candidate of the Peoples Democratic Party (PDP), Dr Ifeanyi Okowa, also said his secondary school certificate is lost.

Another presidential candidate who claimed to have lost all his certificates is Prince Abdul Malik Ado Ibrahim of the Young People’s Party (YPP) while the presidential candidate of the Peoples Democratic Party (PDP), Alhaji Atiku Abubakar, submitted an affidavit informing INEC that he has changed his name from Siddiq Abubakar as it appears on his West African School Certificate, to Atiku Abubakar.

The presidential candidate of the Action Democratic Party (ADP), Sani Yabagi, also submitted an affidavit saying that the name on his degree and West African School Certificate is different from what he currently bears.

The Delta State governor and vice presidential candidate of the PDP, in a sworn affidavit attached to his particulars disclosed to INEC that his West African School Certificate obtained in 1974 was missing.

The affidavit of loss of original certificate, obtained from the High Court of Justice, Delta State, in the Asaba Judicial Division on October 3, 2006 reads in part: “I, Ifeanyichukwu Arthur Okowa, adult, male, Christian, medical doctor and Nigerian citizen of House No. 4, Commissioners’ Quarters, Asaba, Delta State, do hereby make oath and state as follows:

“That I passed the said examinations and was subsequently issued the said certificate therefore.

“That the original of the said certificate issued to me is now missing, lost and cannot be found.

“That I make this oath for the records and do so knowing and believing same to be true and in accordance with the Oaths Law of then Bendel State as applicable to Delta State.”

Okowa, however, attached a Higher School Certificate obtained in 1976. According to the certificate, obtained at Edo College, Benin, in 1976, the governor sat for four subjects, namely, General Papers (Grade B,) Physics (Grade B), Chemistry (A) and Biology (B).

In the affidavit sworn to at the Federal High Court of Justice, Maitama, Abuja, on June 3, 2022, the YPP presidential candidate disclosed that on July 17, 2021, while in transit from Kaduna to Abuja, he lost certain documents which included “original BSc certificate issued by American College of Los Angeles, dated 1988; High School Diploma issued to me by Langley High, Norwich, UK dated 1979 and official degree transcript.

“Also lost was expired international passport issued by Nigeria Immigration Service. “That all efforts made to trace the said documents have proved abortive.”

The former vice president and presidential candidate of the PDP, in his particulars, is silent on the primary school he attended.

He, however, disclosed his GCE results obtained in 1965 and a Higher Certificate (Master’s degree) obtained in 2021.

Further checks revealed that the West African/General Certificate awarded by WAEC and the University of Cambridge, which was obtained from Adamawa Provincial School, Yola, carried the name ‘Siddiq Abubakar’.

The PDP presidential candidate, who was resident at No 3, Ayanboye Street, Anthony Estate, Ikorodu, declared in the sworn affidavit: “That I was known, addressed and called Atiku Abubakar.

Yabagi, in an affidavit on change of name before a Federal High Court in Abuja on November 12, 2018, declared that the name ‘Yusuf Sani’ on his University of Colombia (New York) certificate obtained in 1978 and West African School Certificate, earned in 1974 had since been changed to Yabagi Yusuf Sani.

Nigerians expressed consternation over the particulars of Senator Tinubu who left blank the primary and secondary schools he attended and only offered information on the Bachelor of Science degree he obtained from the Chicago State University, United States, in 1979.

He also submitted his degree and NYSC certificates to INEC.

However, in a sworn affidavit deposed to by Bola Tinubu in 1999 at the High Court of Lagos State, the former governor of Lagos State claimed that his house was vandalised while he was on a forced exile between 1994 and 1998, during the Sani Abacaha military regime, leading to loss of his certificates and other vital documents.

“I went on self-exile from October 1994 to October 1998, when I returned and discovered that all my property, including all the documents relating to my qualifications and my certificates were looted by unknown persons,” he said in the affidavit.

Tinubu did not disclose how he found the missing certificates which he has now submitted to INEC.

In the same vein, among the documents Masari, Tinubu’s running mate, submitted to INEC is an affidavit on loss of his primary and secondary schools certificates.

In the “sworn affidavit for loss of some original documents” sighted by Saturday Tribune, Masari recalled that in January 2021, while in transit within the Wuse area of the Federal Capital Territory (FCT), Abuja, he lost his Certificate of Occupancy for a land located in GRA, Katsina, along with his Teachers’ Grade 2 certificate from Katsina Teachers College and First Leaving Primary School Certificate issued by Masari Primary School, Katsina State (1972- 78).

“That I am the above named person and bona fide owner of the underlisted documents:

“That sometime in January 2021, while in transit within Wuse Area, FCT, Abuja, I discovered that my original Certificate of Occupancy of plot NoKT 17522, GRA Katsina Estate; Certificate of Kaduna State Development Centre from 1994-95; Grade 11 Certificate from Katsina Teachers College from 1979-83 and First Leaving School Leaving School Certificate issued by Masari Primary School Katsina State from 1972-78 got lost.

“That all efforts made to trace the documents proved abortive hence this affidavit.

“That this affidavit is required for record purpose and for all authorities and persons concerned to take note.

“That I make this declaration conscientiously, believing same to be true and in accordance with Oath Act 2004 LFN.”

According to extract from the Police Diary obtained from Divisional Police Headquarters, Wuse Zone 3, Abuja, attached to his particulars, he further stated that all efforts made to trace the items proved abortive.

“The complainant is issued with Police Extract and informed that the extract is not a substitute for the lost items and was advised to go to any competent court of law to swear to an affidavit to enable him to get a replacement from the issuing authority.”

In a country where economic deficit and unemployment have become the order of the day, conceptualizing a business idea in Nigeria and subsequently starting it can be likened to a goldmine which offers an opportunity for people to tap into a better livelihood.

‘My husband got married to my friend after he stripped me naked in public, beat, removed my teeth’