More needs to be done to resecure Nigeria ― Tambuwal 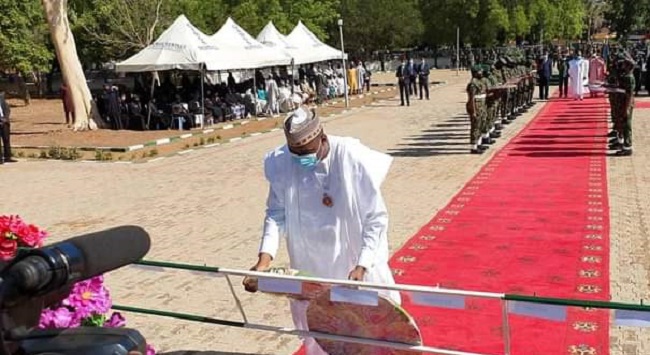 Governor Aminu Waziri of Sokoto State has reiterated the urgent need for Nigeria to be protected and stable taking into consideration the security challenges it is currently facing.

The governor stated this on Friday while commending the Nigerian Armed Forces for doing their best in keeping the country united over the years. He stated this at the Armed Forces Remembrance Day held at Ahmad Maigero Open Theatre in Sokoto, the state capital.

“We need to actually do more to resecure this country,” he said, just as he appealed to the security forces to collaborate between themselves, show commitment to their official pledge and sink their energy into rescuing the country totally.

According to him, the security forces should “continue to work in synergy…live up to their oath of office, and give their best to the service of the country.”

He also commended them “for doing their best in keeping the country together over the years; and particularly with all the current challenges that we have like Boko Haram, banditry, kidnapping and the rest of it.”

“I will like to commiserate and condole all the families of those who lost their loved ones on the lines of duty in the service of this country.

“It has always been our prayers that God Almighty shall forgive their shortcomings and admit them into his paradise,” he prayed.

The highlight of the ceremony was the laying of a wreath by Governor Tambuwal and his Deputy, Manir Muhammad Dan Iya; the Speaker of Sokoto State House of Assembly, Rt. Hon. Aminu Muhammad Achida and the representatives of the armed forces in the state.

The occasion also featured three gunshots, inspection of a guard and honour by Governor Tambuwal and the release of pigeons as a symbol of peace and unity.

The British Parliament at the Westminster Hall held a debate on ‘e-petition 554150, relating to Nigeria and the sanctions regime’ on Monday. The government of the United Kingdom has however responded…More needs to be  More needs to be

The surprise visit made on Friday night by the leaders of the ruling All Progressives Congress (APC) to former President Goodluck Jonathan at his residence in Abuja triggered a stir in the major political camps, resulting in at least four possible theories..More needs to be  More needs to be