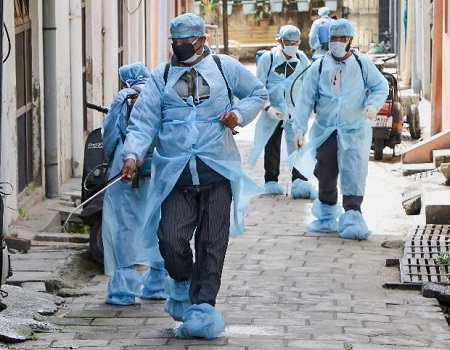 More African nations confirmed their first cases of the coronavirus and shut borders amid fears of the disease’s impact on fragile health systems, as Chinese billionaire and Alibaba co-founder Jack Ma pledged to donate over 1 million testing kits to the continent.

Thirty African countries – more than half the continent – are now treating nearly 400 patients with coronavirus, after Tanzania, Liberia, Benin and Somalia said they registered their first cases.

Africa had until recently been spared the rapid spread of COVID-19, which has infected at least 180,000 people worldwide and caused over 7,000 deaths. But health experts are concerned the continent’s often dilapidated health infrastructure will struggle to cope as cases mount.

“We cannot ignore the potential risk to Africa and assume this continent of 1.3 billion people will blissfully escape the crisis. The world cannot afford the unthinkable consequences of a COV-19 pandemic in Africa,” Ma’s foundation said in a statement.

The foundation will send 1.1 million testing kits, 6 million masks and 60,000 protective suits and face shields to Ethiopia for distribution to Africa’s 54 nations, it said.

Earlier on Monday, the World Bank said it had committed $60 million to Kenya to help the East African nation battle the outbreak.

Some countries on the continent, such as conflict-hit Somalia, depend on donors to support basic public health facilities.

Somalian Health Minister Fawziya Abikar Nur said the ministry had quarantined and tested four Somalis who came from China last week, and one had tested positive for the respiratory disease. International flights to Somalia were suspended for two weeks, the aviation minister said.

In West Africa, the small and impoverished nation of Liberia announced its first case. Liberia was devastated by a 2014 Ebola epidemic that killed 4,000 people, and its healthcare system has remained underfunded despite promises of investment.

Benin, considered a relatively stable democracy in the turbulent West African region, also announced its first case. The Health Ministry said the Beninois national was being held in an isolation ward in the capital after returning from Belgium and Burkina Faso on March 11.

The Health Ministry in the East African nation of Tanzania also confirmed its first case, a Tanzanian woman who had travelled to Denmark, Sweden and Belgium. She had her temperature taken at the airport but had no fever and was allowed to pass, but later felt unwell at her hotel, the ministry said.

Also on Monday, Rwanda, Burkina Faso, Ethiopia, Senegal and Cameroon all reported more cases and South African Finance Minister Tito Mboweni said his nation, which has 62 cases so far, may need to raid other government departments for funds to fight the disease. He did not provide any figures.

Many African nations, including some without reported cases, have ordered tougher control measures, including bans on public gatherings, halting flights and closing schools and universities.

In northern Africa, Tunisia said it would suspend international flights and close its land border in an effort to contain the spread of the virus.

Botswana, in southern Africa, said on Monday it would bar entry to travellers from 18 high-risk countries, including China, Britain, the United States, Iran, France and Italy.

In West Africa, Senegal said it would suspend flights to and from France, Italy, Spain, Belgium and Portugal, as well as Tunisia and Algeria, for a period of 30 days.

Ivory Coast said it would bar entry to travellers from countries with over 100 cases, although Ivorian citizens and residents would be allowed to return if they went into quarantine for 14 days. It also closed schools, nightclubs and cinemas and banned gatherings of over 50 people, according to a national security council statement.

Government buses will give people free rides to curb overcrowding in the public transport system, a statement said.

In Central Africa, Congo Republic said it would suspend all flights from high-risk countries from Thursday. Neighbouring Gabon reduced the number of flights from abroad to one a week per airline and ordered restaurants to close, barring takeout and delivery.

Also on Monday, Kenyan police raided a clinic alleged to be selling fake coronavirus testing kits. Police detained staff and locked the facility, witnesses told Reuters journalists at the scene, after it had been advertising testing kits online.