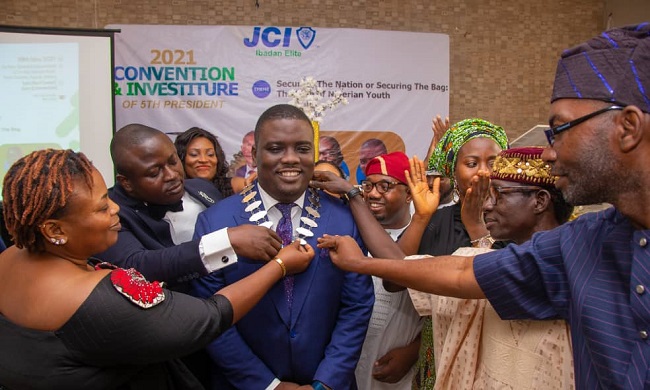 This event which had the newly appointed Vice Chancellor of the University of Ibadan, Prof. K.O Adebowale as the chairman and JCI senator Kalada Apiafi as the guest speaker, took place at the Carlton Gate Exclusive Hotel, Ibadan on t November 28, 2021.

Morakinyo, the founder and proprietor of Valencia Schools, Ibadan had served in various capacities at the organisation. He is the outgoing vice president and has also previously served as the organisation’s director of business for the year 2020 before emerging the president-elect for 2022.

In his brief acceptance speech, the president-elect appreciated the organisation for the confidence reposed in him to lead the organisation as for next year. He promised to work towards ensuring an organisational culture of respect, honesty, diversity of thought and tolerance for differing opinions so that members can remain inspired and engaged, so that all can thrive as a community.

JCI Ibadan Elite which is an affiliate of JCI Nigeria – and also of the international body of the organisation- engages young and active citizens devoted to taking action and creating an impact in their various communities. JCI helps young people to develop skills, knowledge and understanding needed to make informed decisions and take action.