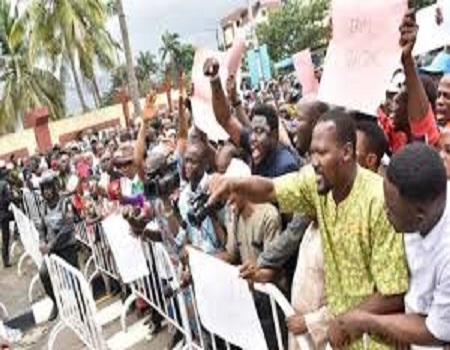 Youths of Modakeke community in Ife North East Local Council Development Area of Osun State, on Wednesday, protested against the choice of Oba Moses Oladejo Oyediran as the new Ogunsua of Modakeke.

The protesting youths converged on Ita-Merin, near Ogunsua palace, Modakeke-Ife, to register their displeasure over the choice of Oba Oyediran.

Speaking with journalists, the leader of the youths, Evangelist Tunde Olasiyan said that their protest was borne out of the old age of the chosen monarch, saying the people preferred his son to rule over them.

According to him, other neighbouring towns such as Ile-Ife, the cradle of Yoruba land, Iwo township and Ipetumodu, Ife North local government among others elected youths as their kings.

Olasiyan further explained that “we youths have spoken with the chosen aged monarch and he has accepted that his son, Prince Bosun Oyediran, should be chosen as the new monarch for the peaceful coexistence of the town.”

He stated that “we are not protesting that the king should be taking from another royal family, we maintain our stand that youth from Ajombadi royal family should be elected and staff of office should be given to him.

Similarly, former youth leader of Modakeke Progressive Union, Mr Olaposi Adegbenro implored the state government to consider the progress and the development of the town by appointing youth as the new king of the town.

He observed that appointment of an aged monarch would not augur well for Modakeke because he would not be agile to attend any meeting within and outside the town, where issues affecting the development of the town would be discussed.

Meanwhile, the state government had concluded arrangement to present staff of office to Oba Oyediran on Thursday, just as armed policemen were stationed at Ogunsua palace on Wednesday.