Mobilising lawyers for prosecution of culprits of building collapse

Real EstateProperty and Environment
By DAYO AYEYEMI On Aug 31, 2021 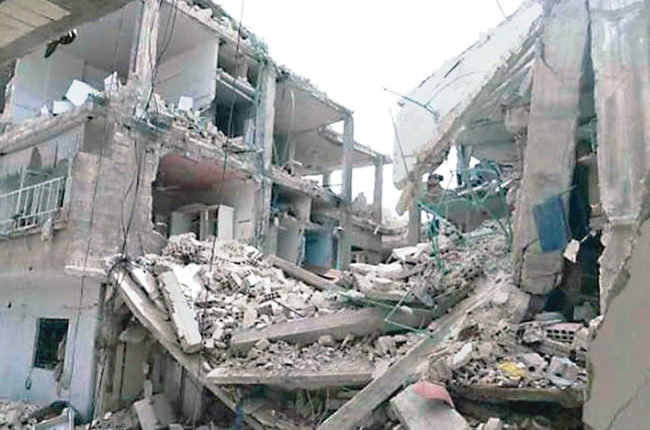 Unless perpetrators of building collapse are prosecuted and made to pay compensation to victims of their crime, stakeholders are of the opinion that the ugly trend will continue. DAYO AYEYEMI, reports

IT is no longer news that the Nigerian building industry has recorded over 461 incidents of building collapse in the last 44 years, and over 1090 deaths with several others injured.

In all of these, it has been discovered that the majority of owners of collapsed buildings were never prosecuted to serve as a deterrence to others.

Also, due to ignorance, many victims and family members of those that died in the incidents did not sue owners of these collapsed buildings, with a view to compel them to pay claims or compensation.

This negligence or ignorance, Nigerian Tribune has gathered, would soon come to an end as the Nigerian Institute of Building (NIOB) and activist lawyer, Mr Femi Falana, are collaborating to mobilise lawyers in the country to take up cases of building collapse henceforth, so that perpetrators will be made to pay for the crime colossally.

Already, they are canvassing stringent penalties for culprits of building collapse in the Nigerian courts as well as compensation for the families of victims and the injured.

All these, they believed, would help to nip all human factors responsible for building collapse in the bud.

For the benefit of the doubt, the duo confirmed that they have set up a committee of lawyers, especially those in the building profession, to take over any case of building collapse and ensure that the culprits are brought to book.

“All of us can claim damages if your rights are taken illegally; and that is what building collapse is about. A builder or an engineer may be liquidated if he gets to court in a building collapse if you are found culpable,” Falana said.

Besides, Falana is seriously canvassing for the prosecution of quacks in the industry.

All these initiatives were disclosed to participants including Governor of Lagos State, Mr Babajide Sanwo-Olu, who was represented by his Special Adviser on works and Infrastructure, Mrs Aramide Adeyoye; former Governor of Ogun State, Otunba Gbenga Daniel; commissioners, policy makers, lawmakers, builders, traditional rulers, top military officers, captains of industry and other dignitaries that converged on Lagos for the 51st Builders Annual Conference of NIOB.

The theme of the conference is “Advancing Technologies, Systems and Standards for Sustainable Building Construction.”

Chairman of the occasion, Otunba Gbenga Daniel and other guests urged the need for recognition of local contents in whatever technologies and systems for sustainable building construction and the nation’s development process.

Falana, who was a Keynote Speaker at the forum, decried incessant incidents of building collapse in the country and the attendant losses.

He said he was at the forum to speak on the engagement of registered builders for managing building construction, keeping the law and keeping the society safe.

He pointed out that the construction industry and various professional bodies in the built environment are well regulated by laws and regulations for the commencement of any development.

But due to the criminal negligence of the regulatory agencies and the relevant professional bodies, Falana said the building industry was invaded by quacks.

“We all know the quacks. What have you done about them other than to gather and complain? Studies have confirmed that quackery is the only source of building collapse in Nigeria,” he queried

In the event of a building collapse, Falana explained that quacks, owners of the house and builders whose negligence led to the collapsed buildings are liable to be prosecuted in the court for criminal negligence and allied offence.

He said:  “You are engaging in quackery, you want to save cost. The owner of a collapsed building is as well liable as far as the law is concerned or the builders whose negligence led to the collapse of the building are all liable to be prosecuted in the court for criminal negligence and allied offence.

“But they have been very lucky in Nigeria, where the law is asleep. From time to time, workers and innocent people are killed in collapsed buildings. Apart from charging the owners of such collapse buildings and quacks with murder, the legal representative of those who have been killed and people who have been injured are entitled to claims, special compensation to assuage the damages.”

Apart from losing their license to practice as builders, the erudite lawyer said that CORBON would also recommend the prosecution of such builders.

“The prosecution of such will not be limited to their involvement in the collapse of buildings in the private sector, builders engaged by the public authority will also be prosecuted,” he said.

The activist lawyer pointed out that in Nigeria, insurance companies are made to pay compensation to victims of building collapse and representatives of those who lost their lives.

Falana disclosed that the Senate has proposed a bill for Compulsory Insurance of Building under construction in Nigeria.

The bill, he explained, would make it mandatory for victims of building collapse to be compensated by insurance companies.

“The senator moving the bill, Ibikunle Amosun, felt the need for amendment is necessitated by the prevalence of collapsed buildings, which has led to unquantifiable loss of lives and properties, as well as personal disability,” he explained.

He urged the state government to be proactive about his proposal, pointing out that despite the Lagos State Building Control Agency Regulations that was ratified by the House of Assembly in 2019, with other states embracing the initiative, enforcement challenges have remained a denominator of the “implementation equation.”

In his analysis of 461 incidents of building collapse in Nigeria in the last 47 years (October, 1974 to July, 2021), Awobodu stated that Lagos topped other states with 295 incidents, amounting to 65 per cent of the cases in Nigeria.

Lagos Island alone, he said, accounted for 67 (23 per cent) of the incident in the state.

While blaming activities of quacks and pervasive ignorance for most incidents of building collapse, Awobodu said the outcome of many investigations of collapsed buildings in the country has revealed a prime cause – quackery.

He suggested teamwork among professionals in the built environment industry to end the menace of building collapse in the industry.