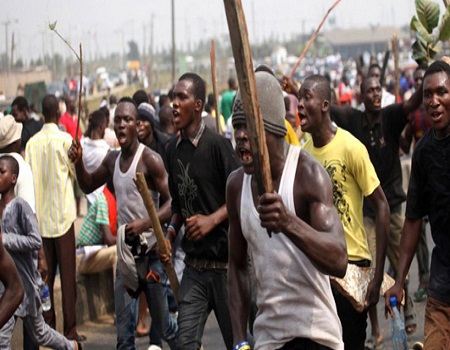 AN incensed mob has reportedly clubbed a cult suspect to death in Delta.

The incident, Tribune Online gathered, took place at about 7:00 p.m on Wednesday.

The cult suspect, notorious for burglary and pilfering, was said to have attempted to dispossess a lady of her iPhone when the mob descended on him after the lady raised an alarm.

After being beaten blue-black, the mob, as gathered, eventually stabbed the suspect to death.

Pandemonium was said to have ensued as people hurried off their stores in an area recently embroiled with killings among rival political parties.

Chuks, in a terse statement, said: “It is confirmed. He is a member of a cult group. He was stabbed to death by the mob.

“The corpse has been evacuated by the police to the mortuary for autopsy.”

Atiku can never be President of Nigeria ― Oshiomhole