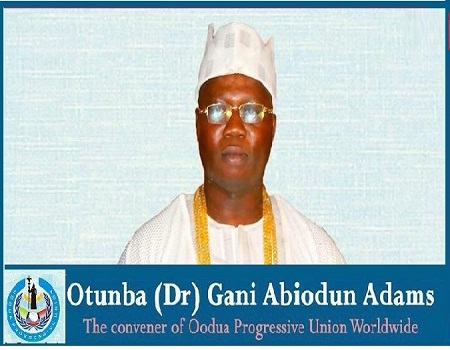 Share
Prominent members and coordinators of Oodua Progressive Union (OPU) on Wednesday decried what they termed alleged misinformation surrounding the OPU Estate allocated to members of the group in Ikorodu area of Lagos State, declaring that some elements outside the group were working tirelessly to soil the name of the  convener, Iba Adams, while assuring that all efforts in that regard would fail.
This was just as the group leaders ascertained that the proposed 120-Unit Housing Scheme, located at Oke Agbo, Imota Local Government in Ikorodu was constructed for interested members of the group.
OPU said this in a statement jointly signed by all its coordinators from across the continents, including Victor Adewale (Europe), Shola Agboola (North America), Segun Ogunpitan (Africa Union), Abiola Ezekiel Ogunlowo (Ag South America), Oloye Bashorun (Asia Coordinator) and the Worldwide General Secretary, Prince Lanre Sunmonu, copy of which made available to newsmen in Lagos.
The coordinators stated that though, construction work was  ongoing at the site, “there is the need for the leadership of the organization to set the record straight and correct the impression of the people, especially unsuspecting members of public that would like to question the rationale behind the dead story  published by an online medium.”
The group, while describing the story as the “ranting of a Parasite,” said its legal department had taken the issue up, insisting that no amount of misleading stories can stop the ideals of the Yoruba socio-cultural group.

Also speaking, the Site Manager and Supervisor of the project, Comrade Dauda Asikolaye, alleged that there were some elements outside the group that were working tirelessly to soil the name of the convener, Iba Adams, assuring that all efforts in that regard would fail.
OPU Worldwide Secretary, Prince Lanre Sunmonu, in his own remark said it had always been the intention of OPU global convener, who is also the Aare Onakakanfo of Yorubaland to create a bond of unity  in the organisation
According to him, “This laudable idea is spelt out from day one that OPU was established in 2011. The intention of the leadership of the OPU is to break the jinx of disunity, disloyalty among all members of the group in the Diaspora and further build the network of relationship, creating both economic, social and  opportunities for all and sundry.”
“And one of such opportunities was the OPU Housing Estate Scheme provided to members by our leader and global convener. The idea was for all interested members of our group to own a house under the platform.
“Oke Agbo Housing Estate is a proposed 120-Housing Unit Scheme designed in uniformed and standard chalets. Construction is ongoing on 60 out of the 120 unit.”

Why Bayelsa Airport is yet to be certificated —NCAA

Amotekun: South-West has no plan to secede from Nigeria ― Fayemi