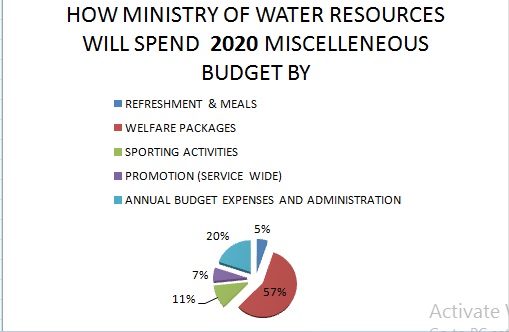 Two hundred million Naira (N200,000,000) has been proposed by the Federal Ministry of Water Resources for tracking water supply under the Sustainable Development Goals (SDGs) programme in the 2020 appropriation bill Tribune Online investigation has revealed.

The item listed as part of the Economic Recovery Growth Programme (ERGP) had the total sum of N14,723,993 budget in the currently running 2019 budget showing an increase of over N170m, an amount more than 120 per cent higher than the 2019 allocation for the same budgetary item.

President Muhammadu Buhari had while presenting the budget to the joint session of the National Assembly few weeks ago tagged the 2020 appropriation bill as Budget of Sustaining Growth and Job Creation.

Tribune Online investigation also reveals that the Ministry of Water Resources will be spending another N20million to produce a compendium and digital map of dams in Nigeria in 2020 if approved by the National Assembly after it had budgeted the sum of N13.462,802 million budgeted for it, in its 2019 appropriation Act which is still being implemented.

The incremental difference of N6.5m in the 2020 budget Tribune Online gathered could complete about three projects in different parts of the country as captured in the appropriation bill 2020.

These projects when completed will improve water supply for domestic and irrigation purposes to the communities where they are domiciled, Tribune Online can authoritatively state.

The ministry copied and pasted the ERGP30111943 Internal Audit Inspection of Capital Projects Nationwide from 2019 to the 2020 appropriation bill standing at the same cost of N28,309,282.

Two other budget items listed by the Ministry of Water Resources headquarters that also calls for public interest are the proposed spending of N48 million on outstanding liabilities for the stores and spending of N150m on unspecified new contracts of drilling motorised boreholes in various locations in Katsina North Senatorial District.

The N48 million, Tribune Online gathered would defray the cost of the following projects ongoing in the budget.

This paper also gathered that the ministry also proposed to spend the sum of N10.137, 608 million for its preparation of the 2021 budget, the figure was the same it used to prepare the ministry’s 2020 budget which it is implementing, while the ministry budgeted another N29 million proposal for welfare package.

These amounts are proposed under the over N50m miscellaneous expenditure of the Federal Ministry of Water Resources for the 2020 budget, the same figure it budgeted in the 2019 budget and used to produce the current budget of the ministry, now before the National Assembly and spent on welfare according to the ministry are all before the National Assembly for consideration.