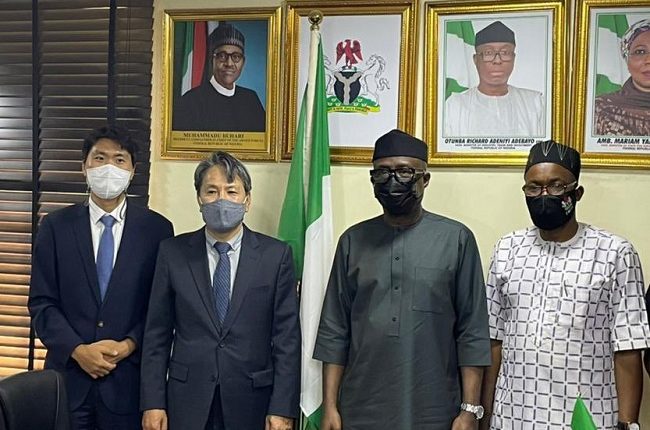 The Minister of Industry, Trade and Investment, Otunba Adebayo has expressed concern over the decrease in the volume of trade between Nigeria and South Korea.

Speaking during the visit of the South Korean ambassador to Nigeria, Kim Young-Chae to his office on Tuesday, the Minister noted that the volume of trade between the two countries went down from $5 million in 2018 to $1.3million in 2019.

Adebayo stated that Nigeria and South Korea shared strong economic and investment ties with over 20 Korean companies presently operating in the country.

He named some of the companies to include Samsung and Hyundai Heavy Industries.

According to a statement by Ifedayo Sayo, Adebayo stressed the need for the South Korean embassy, Federal Ministry of Foreign Affairs and the Ministry of Industry, Trade and Investment to work closely towards improving the volume of trade between the two countries.

He specifically called on Korean investors to take advantage of the country’s involvement in the African Continental Free Trade Zone (AfCFTZ) to invest in Nigeria so that they will have access to the large market in the African continent.

He also told his visitors to encourage investors from South Korea to invest in the new special economic zones established by the ministry in each of the six geographical zones of the country and the existing free trade zones in Calabar, Lekki, Kano among others to boost investment.

Adebayo listed efforts made by the Federal Government to attract foreign investment to the country to include the establishment of a One-Stop Investment Centre to provide 48 hours delivery to prospective investors; ports upgrading, including streamlining of agencies operating at the ports; banking reforms initiative to support real sector; and establishment of special economic zones in pursuit of Nigeria’s industrialisation agenda.

On his part, Young-Chae promised to deepen the trade relations between the two countries, promising support for government programmes.

Police rescue 19 children, others from human traffickers in Edo