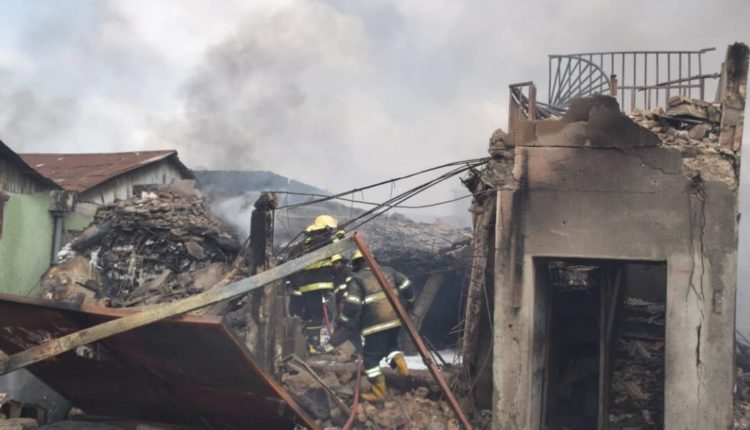 The Nigerian Railway Corporation (NRC), Lagos District has said that the fire outbreak that ravaged some warehouses located at the Iddo Railway terminus in Lagos did not affect train operations. This is even as the Corporation said that millions of goods belonging to users of the warehouses (not NRC) were destroyed.

Disclosing this to Tribune Online exclusively, the Lagos District Manager of the NRC, Engineer Jerry Oche, explained that the quantity of the destroyed goods cannot be quantified as of now.

According to Engr Oche, “Losses cannot be quantified as of now but it’s in millions because several warehouses were burnt. It did not affect rail operations because the fire didn’t affect the Iddo terminus building. It only affected the warehouses which are far from the NRC operational area.”

Shedding more light on the scope of the fire, the Spokesperson for the Lagos District of the NRC, Khadijat Aroyewun, explained that the fire is currently under control, even though not completely put out.

In the words of Aroyewun, “We just came back from inspecting the place. Even though the fire is still burning mildly due to some combustible materials that were stored in those warehouses, that we were there to inspect shows that the fire is gradually being tamed.

“The NRC didn’t suffer any loss because those warehouses were being used by some other people, not the Corporation. So, it is the people using the warehouses that may have suffered losses, not us. The fire didn’t affect the Iddo Train Terminus, so train operations are ongoing.

“Firefighters are still there to ensure the fire is completely put out, and I can tell you that no death has been recorded thus far.”

Recall that the fire which started at about 5 pm on Sunday is still burning 15 hours after the Lagos State fire service has been battling the inferno.

The warehouse is stored with combustible items like candle, batteries, Polish, cello tape.

Over 19 fire trucks have unleashed their content on the fire but due to the combustible nature of the items in the warehouses, the fire is slowly being put out.

Goods worth millions of Naira belonging to users of the warehouses are said to have been destroyed.