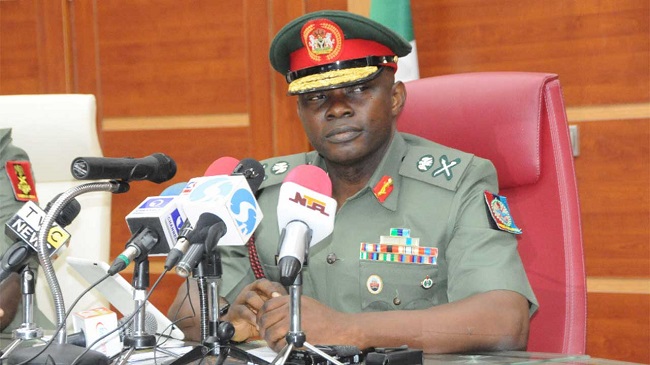 The Military High Command on Wednesday kicked against the recent report by the Amnesty International entitled: “RE – “MY HEART IS IN PAIN” in its Chapter 3 – “Nigerian Military Crimes”, describing it as false and clear desperation targeted at blackmailing the Nigerian Military.

In a statement made available to newsmen in Abuja by the Coordinator, Defense Media Operations (DMO), Major General John Eneche, the Defence Headquarters urged the general public to ignore the trash as the Military was guided by extant regulations and rules of engagement.

According to the statement, “the attention of the Nigerian Military has been drawn to the recent report released by Amnesty International (AI) in its chapter 3 entitled “Nigerian Military Crimes.”

“In as much as the Nigerian Military do not wish to join issues, it is imperative to clarify the air. In the first place, the so-called research does not meet the universal academic or global best practice criteria, of having the justifiable percentage of sample in the population, claimed to have been investigated and thus may not be credible.

“For the entire so-called research, the question is, to whom is the loyalty of the respondents selected by AI; Boko Haram or peace-loving Borno citizens? However, it is desirable in the interest of the general public to bring out some contradictions in the report that tends to criminalize the Nigerian Military which is not true.

“On page 34 of the report, it stated; “AI interviewed only a few older people who had fled Boko Haram areas during 2020, so was unable to determine if there had been changes in the military’s behaviour over the last year.”

“Note; the inability of AI to determine the military’s behaviour.”

“Additionally, in the said report, the AI claimed that soldiers killed older people, among others who were trying to flee from their homes.”

According to it, “AI also admits on page 36 of their report that “during previous Amnesty International research, some former detainees, including children, admitted openly that they had been in the armed group – sometimes through recruitment and other times through abduction.”

“AI cannot rule out that older people interviewed for this report at times supported Boko Haram.”

“This is to buttress the fact that the military will and cannot detain civilians unlawfully.

“Additionally, AI stated that “In recent years, soldiers and CJTF members involved in ‘screening’ have sent fewer older people, among other groups to detention.

“This report also stated that “Conditions have improved in recent years, especially as the Red Cross received more access to some military detention facilities, including GIWA.”

The Military pointed out that these among several others in the report were obvious contradictions to the portrayal of the Nigerian Military by AI. As such, it is a deliberate attempt to discredit the Nigerian Military in the fight against insurgency and terrorism in the North East which should be resisted.

It reinstated that Nigerians should be assured that the Armed Forces of Nigeria would not be deterred in the fight to rid the country of terrorists and criminals in the country despite the allegations.

It stated categorically that the report was clear desperation targeted at blackmailing the Nigerian military. Thus, the report should be discountenanced.

The British Parliament at the Westminster Hall held a debate on ‘e-petition 554150, relating to Nigeria and the sanctions regime’ on Monday. The government of the United Kingdom has however responded…Military kicks over Amnesty