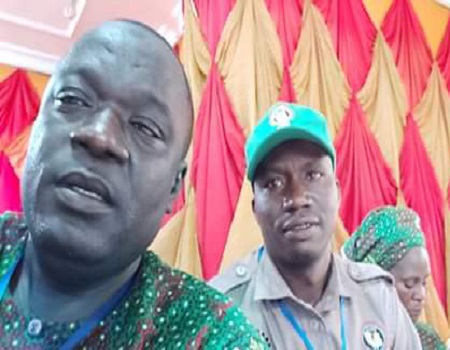 Medical and Health Workers Union of Nigeria (MHWUN) in Adamawa State has disbursed over three hundred thousand naira to about 51 retirees under the Union’s welfare scheme.

The categories of those benefited from the scheme are members who served for 35years and retired.

Those that retired at the age of 65years and those members of the union that died while in active service.

Disbursing the money to the beneficiaries, the state Chairman of medical and HealUnionion of Nigeria, Comrade Usman Babbada said, the amount being disbursed is out of their little contribution from salaries and it is the maiden edition of the scheme.

Usman Babbda noted that the scheme started in June 2019 and it is expected to continue dual for the retirees to have a little after service so as to Carter for the livelihood of their families.
The former Chairman of medical and Health workers Union, Comrade Jeremiah Ngyakw ar, who commended the present leadership of the union equally urged the beneficiaries to use the money for the purpose intended.

Jeremiah Ngyakar told the retirees to go and lay claims at the federal mortgage Bank for their entitlements as there is another content reduction in their salaries for housing projects since the coming of e-payment system in June 2016 in the state.

Some beneficiaries who spoke at the event expressed appreciation to the present leadership of medical and Health workers Union in Adamawa State.