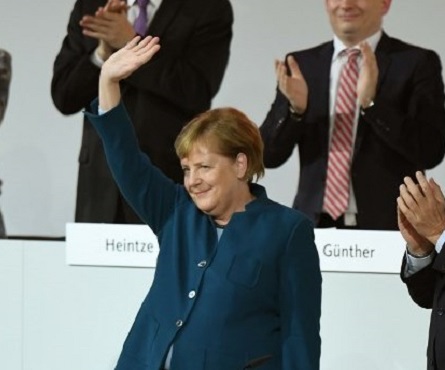 German Chancellor Angela Merkel has given an emotional farewell speech to her ruling Christian Democrats (CDU), as she steps down as party leader.

“Our liberal values must be defended, internally and externally,” she said.

She hinted that she was backing Annegret Kramp-Karrenbauer to succeed her, praising her electoral performance as chief minister of Saarland.

Ms Merkel’s speech was punctuated by applause and she got a standing ovation of more than six minutes at the end. CDU delegates at the congress in Hamburg also held up signs saying “Thanks boss”.

Then the conservative party paid tribute to Ms Merkel, 64, with a video showing highlights from her 18-year CDU leadership. The soundtrack was the 1960s hit Days, by The Kinks.

In her speech she warned of tough challenges ahead, including climate change, maintaining European unity and coping with Brexit.

She reminded the CDU of other electoral successes last year, avoiding mention of this year’s setbacks in state elections, which were heavy blows for her.

“I don’t need to be party chairman to remain bound to this party. And I’m still chancellor,” she said.

She stressed that the CDU stood for human dignity, and praised the late US President George Bush Senior and late German Chancellor Helmut Kohl for reuniting Germany in 1990. She was at the funeral of George HW Bush on Tuesday.

Speaking of the end of the Cold War, she told the CDU that “at that decisive time he (Mr Bush])trusted Chancellor Kohl, he understood how politics must serve everyone”.

She expressed “overwhelming gratitude” for having had the role of CDU leader. “The future will test our values we must always approach work joyfully,” she said.

Economy Minister Peter Altmaier, a Merkel ally, said: “I am convinced that with Annegret Kramp-Karrenbauer we have the best chance of the CDU winning an election.” She would be the most dangerous candidate to face the center-left Social Democrats and the ecologist Greens, he added.

Kramp-Karrenbauer’s trump card is her record as a former state premier in Saarland, where she led a broad coalition with the Greens and pro-business Free Democrats, alliance-building skills useful in Germany’s fractured political landscape.

Kramp-Karrenbauer, 56, has differentiated herself from Merkel on social and foreign policy by voting in favour of quotas for women on corporate boards, opposed by Merkel, and by taking a tougher line on Russia.

But on what lies ahead for the CDU, Kramp-Karrenbauer says: “I have no particular recipe.”

By contrast, Merz takes clear positions that appeal to rank-and-file party members hungry for a more clearly defined party after 13 years under Merkel as chancellor. He wants tax cuts, a stronger EU and a more robust approach to challenging the far-right.

Merz will benefit from the fact that 296 of the delegates at the Congress almost a third will be from his home state, the western region of North Rhine-Westphalia.

One senior CDU official, speaking on condition of anonymity, said many delegates were undecided before the Congress and could be swayed by how the candidates present themselves on Friday.

Merkel sworn in for fourth term by Bundestag