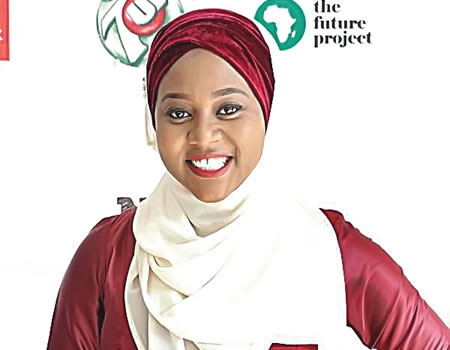 TWENTY-FIVE-YEAR-OLD Hauwa Ojeifo is one of the three young Nigerians to receive the 2018 Queen’s Young Leaders award in recognition of the lead they are taking in their communities to change lives – the others being Kennedy Ekezie-Joseph and Isaac Ezirim.

The award, which is in its fourth and final year, celebrates outstanding young people between the ages of 18 and 29 from across Commonwealth countries who are working to improve lives across diverse range of issues –from health, education, to promoting gender equality.

Ms Ojeifo and her compatriots will join 237 other award winners in a unique community of influential change-makers who represent all 52 Commonwealth countries to receive their award from Her Majesty The Queen at a special ceremony at the Buckingham Palace in June.

Last year, 27-year-old Nasir Yammama and Bukola Bolarinwa also received the prestigious award. While Yammama, a creative technologist, was honoured for his innovative and impactful work in agriculture, Ms Bolarinwa, a survivor of sickle cell disease, received the award for helping people cope with and or overcome the disease and for promoting a culture of voluntary blood donation.

Hauwa Ojeifo’s story is one of dogged determination to succeed against all odds. She was diagnosed with a bipolar and post-traumatic stress disorder in December 2015, and could not find any support group to help her through her mental illness.

Mental illness of any kind and the stigma that comes with it would be enough to make others fold and recoil into misery; but not Hauwa. She did not just pull through it; she started the She Writes Woman in April 2016 to use her personal experience to help others.

She said,“I started this movement two months after a near suicide attempt. I was diagnosed with bipolar and post-traumatic stress disorder with a bit of psychosis two years ago after years of extreme mood cycles that simply messed me up.

“I’ve experienced the full spectrum of paranoia, delusions, suicidal ideation and so much more. I’ve taken medications, put on tonnes of weight, felt useless and hopeless and everything in between.”

She says these conditions are debilitating for sure, but not enough to put anyone down; ‘you can live through it’ she seems to say – she did!

“Mental illness is not a death sentence; it is not wearing rags by the road in a bin pile. That’s the picture that always comes to mind even unconsciously.

She told womenofrubies.com that when she started She Writes Woman in April 2016, it was purely to serve as an outlet for her to see if there was anyone who could relate to what she was saying.

But according to her, today She Writes Woman has impacted over 7000 Nigerian women directly and over 15,000 women globally indirectly.

“We run a mental health helpline, monthly support groups, quarterly outreach to psychiatric patients, social media live streams, a creative gift and souvenir store as well as the mind and mental health coaching practice. We have presence in six states and counting,” she said.

Hauwa says she now talks freely about her mental illness – diagnoses that are theoretically speaking, incurable – in the past tense because she hasn’t had any of my symptoms in over a year.

“I learnt and got certified in coaching and therapy. I also consult and train individuals and organisations in mental wellness. Many people are in an extended state of mental, emotional and behavioural dysfunction because they don’t have a 3D approach to mental wellness. As a mind and mental health coach, I can give you that.”

Hauwa is from Ewu-Ishan, Edo State. The last of four children in her family, she graduated top of her class with a BSc (Hons.) in Business Administration (International Business) from the Bells University of Technology, Ota, Ogun State.

She also holds an MSc in Investment Banking & Islamic Finance from Henley Business School, University of Reading, England and has had a career that spans six industries, including health, finance, fashion, event planning, retail services and digital marketing.

The Queen’s Young Leaders Award was established in 2014 by the Queen Elizabeth Diamond Jubilee Trust, in partnership with Comic Relief, the Royal Commonwealth Society and the University of Cambridge’s Institute of Continuing Education, in recognition of The Queen’s lifetime of service to humanity.

Now a complete network of award winners, these winners will attend a residential programme in the UK next month (June) when they will receive their award at the Buckingham Palace from Her Majesty the Queen.

‘Weigh your options before settling for full-time housewife job’

Who owns my pregnancy?