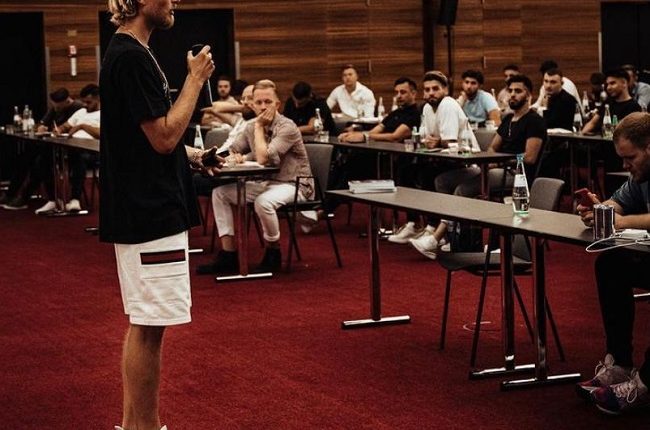 For Richard, the dream began early. Born to two entrepreneurs in a small town in eastern Germany, he longed to one day create something greater than himself. Richard got his first taste of success as an athlete. At the age of 14, he began attending a sports high school in Magdeburg, Germany to play semi-professional basketball in the 1st Youth Basketball league. This winning feeling spurred Richard on to pursue financial independence and begin his career before even finishing high school. “This formula only works if you are honestly passionate and genuinely driven by the right purpose,” he says. “You are the judge here. Your manifestation is reliant on your power of intention.”

Imagination, desire, focus, belief, passion, and purpose; these are the six qualities Richard Buettner says it takes to become a successful entrepreneur. As a self-made millionaire, public speaker, and best-selling author, Richard is certainly an example to look to in the world of entrepreneurship. Harnessing the power of social media, Richard has established a winsome brand, reaching an audience of millions, and sharing his secrets for success along the way.

Richard emphasizes the importance of manifesting your desires and dreams into reality. He explains, “When you have a desire to create something and you are able to imagine it, the first step is done. Now you have to focus your energy, thoughts, and feelings on achieving just that to start building up the belief that you can and will achieve it.”

As Richard’s sales career took off, leadership opportunities became available to him. In January 2016, Richard partnered with a financial education company based in the United States, serving as the President of the organization’s European chapter. Today, Richard continues to be surrounded by prominent forerunners in his industry and powerful influencers from around the world. He has produced some of the most watched travel lifestyle videos working with some of the biggest names in the world – from celebrity artists like David Guetta to the most powerful entertainment brands like Marvel. “To be a leader, I would say you must have integrity, honesty, and a good heart,” Richard claims, before adding, “Yet from what I see, not every leader has those. What I do see in every leader is a strong vision that people follow. Leaders must be very certain of where they are going and have the ability to motivate and inspire other people to do more than they already do.”

Although Richard is a visionary and leader in his industry, he warns other entrepreneurs of the dangers of an inflated ego. Instead, Richard says that the true secret to success is duplicating leadership. “Most so-called ‘leaders’ in 99% of traditional companies have one thing in common: They try to fabricate fake success stories, keep the influence of small people low, and try to be the star of the show. To have real success, give them room to grow, share the stage with them, and don’t be all about the fame and hype.”

He adds, “Treat people like you want to be treated. Give new people the chance to grow and become better than you. Share your heart with them, listen to their problems, and help them reach the next level.”