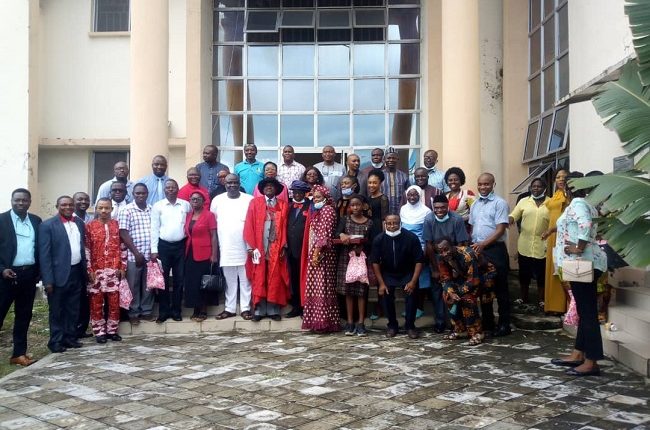 The members of the Medical and Dental Consultant Association of Nigeria (MDCAN), Federal Medical Centre (FMC) Lokoja, has urged the Federal Government and relevant stakeholders to give topmost priority to the health sector for quality healthcare delivery in the country.

The call was made during the ”Time In Service Ceremony”, in honour of two MDCAN retirees; Dr Oyeniyi Oyewole and Dr Oluseyi Adeosun, as part of activities to mark the association’s 2021 Biennial General Meeting (BGM), tagged: ”Preparing Well For Retirement; Challenges & Solutions”, at FMC Lokoja.

In his remarks, Dr William Adeyemi, the MDCAN Chairman, FMC Lokoja, said the association was celebrating two of her retirees, a Surgeon and an Anaesthetist, saying, ”we are happily celebrating them today as a mark of honour and respect for them.

”It is an honour to have seen them worked and put their medical profession in practice in an excellent way, that is why we planned this ceremony for them today to appreciate what they have done’.’

According to him, we have the manpower as most of the doctors, nurses and other professionals around have the capacity to carry out their best, but there are no infrastructures to work with.

“When you go abroad, you work with good equipment, and when you come back home there are deficits, so what do you do?

“You plan to go back abroad to go and continue your work where you will be comfortable. These are the issues we are facing in Nigeria.

“We are hoping that with time there would be an improvement in equipping most of the hospitals to meet the standard,” Adeyemi said.

In his remarks, Dr Olatunde Alabi, the Medical Director, FMC, Lokoja, said it was a beautiful thing celebrating two of their medical professionals at FMC Lokoja, who were retiring.

According to him, they have laboured and this is a day in which they have to be honoured because everybody is happy with their contributions to the practice of medicine in FMC Lokoja and Nigeria as a whole.

He described the retiring consultants as men of sacrifice, compassion, and sincerity, who had contributed their best and rendered selfless services.

The medical director urged the upcoming medical professionals to learn by example as everybody’s retirement day would definitely come one day.

“So, we should learn from their own examples, because everybody is happy with them today so that people can also be happy with you.

“They can come to FMC Lokoja safely without any hindrance after their retirement, and they are welcome any time,” Alabi said.

The Chairperson of the occasion, Dr Janet Ipinyomi, said she was quite impressed with the occasion being her first time attending such, and congratulated the celebrants for successful years of service, saying it was very colourful.

“I will encourage all doctors to join the MDCAN once they become consultants because I don’t have the opportunity to be a member when I was a consultant here almost 20 years ago.

“But I am glad that the younger people have made a lot of advances in the profession,” she said.

In their separate comments, the two celebrants, Dr Oyeniyi Oyewole, a Consultant Anaesthetist and Dr Oluseyi Adeosun, a Consultant Maxillofacial surgeon both appreciated the effort of MDCAN and management of FMC Lokoja, for the honour bestowed on them in making the program a unique one.

“I feel very happy because I never expected this kind of honour.

“The event is very unique because they put it at the beginning of the MDCAN Annual General Meeting, and not isolated from it,” Oyewole said.

Oyewole advised the federal government to give the health sector a top priority in Nigeria in order to reduce brain drain.

“If you consider what is happening now, I am not happy at all because professionals are going out of the country.

“I also got two different letters to come to Saudi Arabia, but I am yet to say yes or no to those letters.

“I want to believe in the next three to five years, I wonder if we are going to have somebody like us in the country again.

“So, that is the more reason the federal government should prioritise the health sector and make the first in its priority list,” he said.

He stressed the need for the federal government to always do the needful as far as the health sector was concerned in Nigeria, saying, “no doctor actually like strike because the hospital is our second home.”

On the issue of retirement age, he urged the federal government to extend the retirement age of medical practitioners working in the hospital to 70 years so as to impact more knowledge on the upcoming doctors.

According to him, we are just training consultants and throwing them away; the number of Nigerians in European Countries and the USA today are so many.

“If our hospitals are made comfortable even after retirement, I am ready to stay and train people rather than going abroad.

“Money is not everything though it is part of it; I am still agile and ready to impact knowledge at age 60,” Oyewole said.

On his part, Dr Oluseyi Adeosun, a Consultant Maxillofacial surgeon expressed his displeasure over the current trend of incessant strikes associated with the health sector, saying ”it is frustrating and discouraging the medical practitioners.”

Adeosun noted that paralysing activities in the hospitals was not making the practice to be smooth, saying it was not so in the past when he was in university.

He, therefore, advised the striking resident doctors (NARD) to go back to the negotiation table and re-negotiate with the government on their demands.

“There is what we called, ‘Compromise Democracy’ where both parties will make a compromise.

“We don’t expect the government to give us all our demands, but the one Government is able to do, the NARD should accept it, and go back to work,” he said.

He, however, urged the federal government to fulfil its own promises made to NARD, saying, ”you have signed documents which should be strictly abided to and actualised.

“The federal government should fulfil their promises in those documents so that the NARD can go back to work,” he said.

Adeosun also noted that the procurement of substandard equipment by government’s contractors for hospitals, was also a major challenge, saying most of the equipment is substandard and don’t last.

He urged the government to stop procuring medical equipment from Asian countries, but to patronise European countries and the US who are known for producing quality, durable and long-lasting equipment.

He added that the zeal and enthusiasm for doctors to work was no more there because of poor motivation, which had hindered the delivery of quality service to patients.

He added that the economic situation in the country had made lots of doctors to be inclined in pursuing money, which had made many of them abandon their core assignment

He advised the government to motivate health workers by creating a conducive environment for doctors to work with adequate standard equipment to avoid brain drain.

“All these problems have reduced the quality of service that is being given to patients in this country,” he said.

The highlight of the occasion was the presentation of the Award and a Scanfrost gas cooker to each of the celebrants, presented to them by the MD FMC Lokoja, Dr Olatunde Alabi, and the Chairperson of the occasion, Dr Janet Ipinyomi.