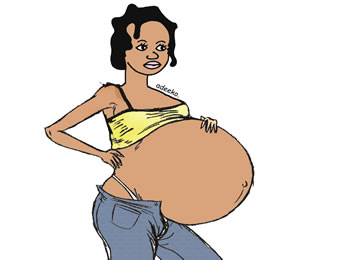 IT’S not a myth that there has been a vast increase of teen pregnancy in our society. Teen girls, usually between the age bracket of 13-19 years old are now vulnerable and exposed to sexual activities than before. These girls, who are mostly high school students or school leavers, now face the life of motherhood rather than to focus on their future. Less than average of these pregnant girls are not planning towards marriage. As a result of the unplanned pregnancy, some of them opt for abortion to avoid shame and stigma in the society. Those who decide to keep the pregnancy will either suspend schooling or drop out of school so as to start a petty trade to cater for the child. In some cases, a few of them are focused into marrying the father of the child; not regarding their age factor, psychological readiness or financial capacity. However, one would wonder why some underage girls involve in sexual activities at the early stage of their lives.

According to the data gotten (International journal of science commerce and from humanities; vol no 5) , media is one of the key factors that are responsible for teen pregnancy in our society. The availability and affordability of gadgets has given a lot of people the priviledge to access any medium they are attracted to.  Through the media, the world has become a global village where we can easily get connected with people living within and outside our geographical area. Simultaneity and interconnectedness have been made possible; people can now share their opinions, ideologies and experiences to millions of people all around the world. As a result of this, media are being used to promote different contents which could either be of positive or negative effect. Nevertheless, some of these contents are eroding decency in our society, especially among the teenagers. Youths who are chaste or vulnerable are now cultivating horrendous habits through the media. One of the vices teenagers tend to learn more from the media is sexual activities.

Research had shown that 80% of all movies shown on network or cable television stations have sexual content. An analysis of music videos indicates that 60% portray sexual feelings and impulses, and a substantial minority display provocative clothing and sexually suggestive body movement. Although, sexual content in the media can affect any age group; however, teenagers are more vulnerable. This is as the result of their inability or limited ability to analyse media messages and interpret them in a way that will positively contribute to their lives. Aside from what they learn from their parents or teachers in school, they tend to base their assumptions and decision from what they’ve seen on the media. They talk more on sexual related topics and sometimes put them into practice. Be that as it may, our society is at risk if we neglect the necessity of annihilating and campaigning against teen pregnancy. There should be more bodies who will effectively check and balance the contents of media messages; most especially television and radio programmes. In addition, parents and guidance have their role to play in order to downtrod girl-child pregnancy in Nigeria. Parents should guide their children on websites and platforms they should be exposed to. Parents should also educate their children about sexuality, how to deal with peer pressure and how to relate with opposite sex.

Events planning pitfalls and how to overcome them